There is not much to our front garden. A couple of trees and a lawn. One day, perhaps. But the red geraniums add a splash of colour. This is partly due to the sort of trick that Chelsea growers get up to. Our problem is aspect. The front of house gets evening sun in the summer but is shaded for the greater part of the day. The trick – one of those happy accidents – is to bring the geraniums into flower at the back of the house – the sunny side. Codger, dodger-like, then moves them (in their troughs) to the front. He has discovered that, once powered up, they will repeat flower right into the Autumn 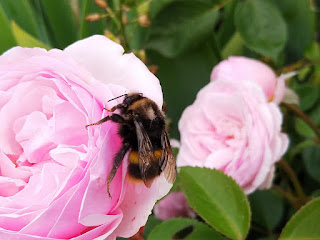 Photos – a few things
I have previously given a tip about taking photos on a mobile: always clean the lens. Simple – but obvious, once you think about it. The fingerprint sensor is probably next to the camera – smudges!
When I changed my mobile last – just before Christmas – I spent some time looking at the cheaper end of the market. In the end, I went for a pretty straightforward Nokia. I like to take sharp photographs, so I was looking for a mobile phone with a good camera lens – preferably, Zeiss. To Codger, one good lens makes more sense than four middling lenses. Overall, for the modest outlay, I have been very pleased. Take a look at the bee on the rose

I’ve only one quibble – and this might apply generally – some shades of red do not render accurately. It is as though the sensor saturates – that may even be the technical expression. So, the colour of the geraniums (top left) and the roses (immediate left) are not well reproduced. The actual colour in both cases is rather deeper and certainly much less gaudy. I wonder if other users have found the same?

Another tip. My camera software has a setting called Live Bokeh. This has the effect of blurring the background whilst keeping the subject in focus. I guess it is a common feature these days. Not always, but quite often, this will give you better flower shots. You have to give it a moment to settle. On my camera settings, it comes up with the message ‘depth success’ so I know I the software has scratched its head and is ready to take the shot. If I am unsure, I take two shots – one with Bokeh and one without – and select the better of the two

Tomato update
This, really, is the last call. We have a few tomato plants left and would be pleased to see them go to a good home. As a reminder we have Money Maker, Super Sweet and Cerise. If you are a beginner, you should find Cerise to be the best choice on the Codger B4B scale. (B4B = Bangs for Bucks – see the previous post)

Time to tie in
If you are growing a bush tomato like Cerise, the one we have been supplying, check to see if it needs to be tied in. If it was one of the first batch you will almost certainly need to act quickly. Simply tie the growth back – loosely – so it does not flop around. You should have some support for it as shown in the photo. As you see I have a line of them against the conservatory wall where it is warm. I have a bit of trial going on, testing various bush varieties – that explains the number of them

The potting compost trials
Time to report. Main finding: more research needed (that guarantees a PhD). Certainly, little evidence that there are huge differences between the qualities of potting compost. I scored each pot. The professional compost came out best with the trad peat-based and B&Q standard pretty much equal and not that far behind. Comments:

Plug plants again
Last week I mentioned plug plants. I now have a photo for you. The pen is simply there to give you the scale. I thought it might help readers to see just how small these plants are in reality

The second photo illustrates that many are arriving in poor condition – largely due to lockdown problems, I imagine. We have no less than three refund requests running at the moment. The suppliers all apologise about office delays. They are having trouble replying to the many emails they are getting. I imagine that many relate to the poor condition of the plants received. Something is going badly wrong. It actually affects planning in the Codger nursery - with growing, you have constantly to think ahead to get things right

Weeding lawns
Now we have had some rain, I suggest adding ‘weed the lawn’ to your to-do list. Codger actually enjoys weeding the veg patch – but hates weeding the lawn

But he has the tool for the job (see photo left). I think it was designed by a surgeon. Great for dealing with the big nuisance – rosette shaped weeds with a long tap root. These tend to create bare patches in the lawn. Codger avoids weed killers but confesses to having rather shabby lawns. B4B? Lawns score very badly

Aquatic plants
If you have water lilies or other aquatic plants, then you may already know that a bit of annual maintenance is needed. You will invariably find, when you remove the basket from the water, that much of the soil has disappeared and repotting is necessary. This aside, water lily rhizomes frequently outgrow their baskets often bursting them apart. When repotting one thing is vital: do not use normal potting compost; instead, use soil that has no organic matter. I deploy unimproved clay from the original ‘soil’ that made up our garden. I deliberately keep a supply by the back hedge

Another ‘do not’ is do not use an ordinary plant pot – you need an aquatic basket. Line it with permeable material like sacking, add the clay and, with the plant in place, top with gravel. This is to help prevent erosion due to fish poking around the roots. Sounds a lot of work – and, it is. Again, not good on the B4B scale

From Mr Darcy to Mr Holroyd
Strange thing doing a blog. I think it is the very act of writing that unearths forgotten memories. That piece on Wednesday about swimming out into the lake to gather a lily blossom. I have not thought of that moment since it happened, not consciously. It was a solo performance there being no Miss Bennet to receive the bloom from the dripping hand of a young Mr Darcy Smith. But these were the days before the BBC TV shaped our perceptions of Pride and Prejudice

More vivid in my memory are my experiences of gardening at school – almost wholly negative. Having failed the 11+ (thus meeting expectations our teacher– no-one ever passed at our primary school) I attended a Secondary Modern at which Gardening was taught as a subject. We were instructed in fierce terms by Mr Holroyd, a Lancastrian with an accent to suit. I can hear him now, “PO-tassium prO-mOtes a lush, green growth” with a peculiar emphasis on the repeated vowel – O. But I suspect my memory is playing tricks as it is ni-trO-gen that promotes a lush, green growth. Rather, PO-tassium produces a strong and healthy root system

The lessons were, I suppose, meant to be practical. But, looking back, I think I now detect a marked reluctance on the part of our guardian to allow us to go outside. What were three forks and a couple of spades among 30 boys? However, we learned the theory of digging and made copious drawings to illustrate single digging, double digging and bastard trenching. Did you know that the depth of the spade is a spit? Such was my introduction to gardening. None of this theory was I able to practice as we only had a backyard – absolutely no scope for horticulture there. You can see a Mr Holroyd look-alike in the photograph above. Such were the 1950s – still in the shadow of a war that had bankrupted the country

So, generally, gardening did not figure in my young life. Nor plants that much - until the later encounter with the water lily. Just one memory stands out. We used to go up to London from time to time to see a show – London Palladium and so forth (I was 12 before we had a TV set). My memories of London are, literally, black and white. Except for one thing: the rose bay willow herb. In my mind they stand out in vivid colour - in contrast to the gaping bomb sites in which they proliferated. In dark times you look for a bit of colour

Fiction and fact
I am told that there was a wartime myth that rose bay willow herb attracted enemy bombs (it is also known as fireweed). Perhaps that accounts for its unpopularity. Yet, in other countries such as Russia, it is valued and used to make a herbal tea for which health benefits are claimed. Exhausted by lockdown? Try making Ivan Chai, as the Russians call it. There are several videos from which to choose. The Cyrillic equivalent of Mr Darcy with a luxuriant black beard will give you a wonderfully relaxing explanation here. Ivan Chai is said to ease stress and help one to relax. In fact, as I take another sip, I can hardly stay awake to wish you…

… all the best  from your friend, the old Garden Codger


Postscript
The interruptions with supply, mentioned above, mean that we have not been able to make up as many hanging baskets as planned. However, this one is still available and just coming nicely into flower. As usual, if it appeals, just get in touch ... 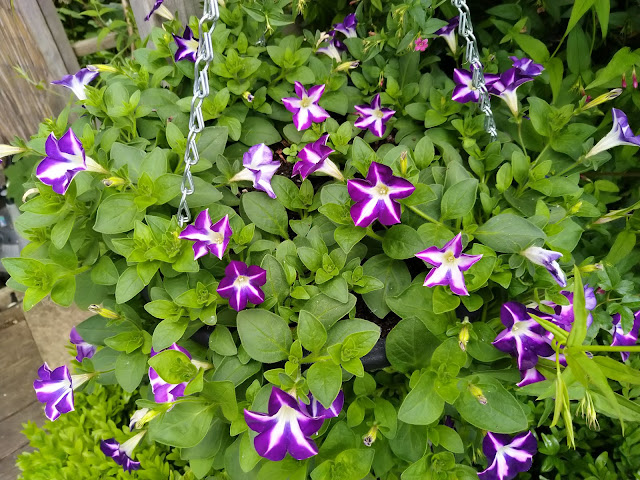