Don’t be fooled! My tomatoes are not yet at this stage – this photograph was taken in August 2019. But it serves to show the transformation in the greenhouse – look back to Monday’s post – from cold thick clay to a rich soil with the resultant productive growth


It is instructive to look at the stages between. During the Spring the greenhouse is mainly used for propagation. I start most plants from seed. This year, that was a particular challenge because of lockdown. I just had to use such seeds that I already had to hand or could obtain from friends. Amazingly, nearly everything I grew was useful to somebody – hardly anything has been wasted - and this has obviously helped to boost the funds that have been raised for charity (see here)

The seedlings gradually get moved on until we reach the stage where the planting bed becomes completely clear. Now a rather important point - and do remember that, despite his age, old Codger is relatively new to proper greenhouse growing. The expert recommend that the soil in the planting border be replaced. Well, I was planning to refresh a bit rather than actually dig out the lot. Not so much a matter of time but, rather, having good material to do it with. Lockdown again to blame - and sticking to the rules about venturing out. So, having cleared the bed I planted up as you see below

The tomatoes are planted directly into the greenhouse border as shown here (photo right). These plants will provide us with tomatoes through July, August and September. However, I still have a niggle about soil exhaustion and wonder about the Manure Mountain. Some good material from that source would allow to top-dress - that is, add a generous layer of rich material with the plants in place. I should add that they are growing well but will need every ounce of goodness to produce fruit throughout the coming season

Well, checking the forecast and seeing that we were due for heavy rain later in the day (correct!) I made an early-morning dash for the Mountain! I'll share the result with you before I sign off. For the moment, I would just add one thing. None of this applies if you are growing tomatoes outside. And, we are doing that as well. I do not wish to give the impression that a greenhouse is essential for growing tomatoes. We have plenty plants outside - enjoying the rain as I write these words. Now, let's have a change from tomatoes. Here are a few productive things you might consider doing at the moment 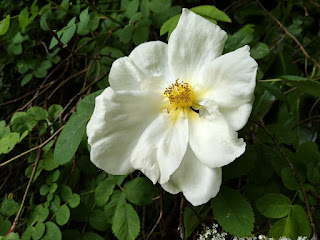 Roses for nothing!
Among the outstanding blossom this Spring, we came across a white rose. It was growing wild but its lovely single form suggested that it is a garden plant that has escaped captivity. Now, honesty demands that I admit that I have never successfully got a rose cutting to take. With the Codger readership looking over my shoulder perhaps I'll do better this time. The method is simple: cut beneath a leaf node, remove the lower leaves and insert into cutting compost. The photo below shows the wand I removed from the bush cut into three lengths


Experts tend to disagree about two aspects of the process: clay pot / plastic pot and rooting power / no rooting power. Having both a clay pot and rooting powder to hand, I followed that traditional route. I shall try to remember to let you know how we get on. The two pots are under the greenhouse bench so I must not forget to keep them moist - but not wet. Incidentally, it might be a bit early for rose cuttings - again, there is some disagreement about the best time. I did some in the autumn last year storing them over winter in the green house but they did not fair well. Perhaps because they were out of sight, out of mind, they died off before we reached the Spring

Dividing primulas
I have not tried this before so this could be the blind leading the partially sighted. We have a really good display of primulas on the patio. The flowering has come to an end and I have moved the pots into a shady spot at the rear of the garden. But they look keen to have another go. I am wondering if I can capture that energy by getting them to multiply by division. If the weather allows I shall take some photos and show you the method. These plants look healthy so we stand a good chance. Come back on Friday! 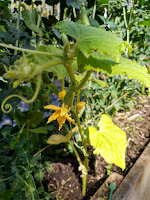 I have to admit that my planning is far from perfect. Skilled gardeners seem to know the end from the beginning. I know I should try harder but fail often. I could hide this by making claims about opportunistic planting. This sometimes, but not always, pays off. Here's an example. I have just one row of peas (we have just eaten some with bangers and mash). But these will be over soon. Having some spare cucumber plants, I popped a few in in order to use the ground once the peas have stopped producing

What I must not forget is to leave plenty of space for flowering plants which, at the moment, are mere seedlings. This is what I did last year. This is what gave me the stock of plants that were used the make up the boxes that many of you kindly took off my hands


A successful visit
Here is the result of our visit to the Manure Mountain: 19 bags of fantastic compost. The best stuff is at the top of the mountain, so considerable humping effort was required. To the extent that poor old Codger was too tired to unload yesterday. That will be his first task when he gets going this morning

The car was pleasantly warm for the drive back as the contents of some bags was ripe and still working. But absolutely no smell, though. The very word 'manure' can conjure up the wrong picture. I'll explain more on Friday. I had better sign off now - but see below for an update from Rachel White. (I got one point wrong - Rachel has only froglets - although where she lived previously it was the toads that totally predominated)

Best wishes from the Garden Codger 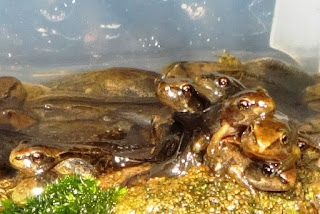 The froglets have started leaving the ponds now, so I have tried to create a slope from the ponds to the ground using a piece of slate to make it easier for them. It is interesting how they all grow up at different speeds. Some are still tiny tadpoles, some are larger tadpoles, some have back legs, some have back and front legs and tails and some are now tiny frogs. I have read that the more advanced ones release a chemical into the water which slows the growth of the less advanced ones! It is thought that this strategy increases survival rates, I think so that they can all find enough food? 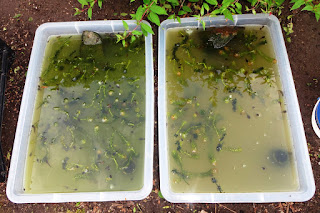 Frogs lay a lot of frogspawn as only a tiny percentage make it to adulthood, due to predation by birds and other pond life, such as young dragonflies. We have blackbirds nesting in a tree on the other side of the garden, so some may be taken to feed their chicks. I think my mum is glad that they won't all grow to adulthood, as when I attempted to estimate numbers, I think there were around 1500! Plague of frogs anyone?!