Codger is writing this introduction on Monday ready for publication tomorrow. A dull but blustery day that has driven him inside. So, very different to last week with its oppressive heat. A month ago we had a rather windy, though sunnier, week. I got sore eyes working outside, something I had not previously experienced. Perhaps it was the dust blown about but having had some help from the optician I have decided to play safe today. So, I am glad that I had pressed ahead with dividing our bearded irises on Saturday - it took the best part of the day. This means that we now have a good stock of new plants available to anyone who would like to have a pot from me (they should flower like these in the photo left)

The photo shown here (right) is an entirely different iris. As you see, it has the most amazingly deep, velvety purple colour. Last year it flowered exactly three weeks later it has done this year – well into July. Perhaps that was because it was still settling down. I first learned about this iris from an article by Alan Titchmarsh. Keen to grow it, I actually redesigned and re-organised the water garden to get the right conditions. I almost lost the plant in the winter but the changes seemed to do the trick. To the extent that I now also have seedlings that are also doing well. Mind you, they may belong to yet another iris – the yellow flag that grows immediately next to the Ensata. A possible labelling error – well, not so much an error – read on …

Labelling
Do you find some jobs a chore? Labelling comes into that category for me. The unplanned success of Codger’s Nursery ran me out of labels and, for a while, new supplies could not be obtained. As regular readers will know I resorted to making my own from plastic milk containers. But whatever material I use, I seem to encounter a a familiar problem: the ink fading or washing off. I have found this to be a longstanding issue. Different makes of pens have been tried and I am about to trial another solution: wooden labels rather than plastic. I don't feel too optimistic but, I reckon, it is worth a try. Now, back to the irises

Irises for you?
As you know, Codger does not charge for plants. Rather, we encourage our fellow gardeners to make a donation to BCM, the charity we support. Due to Saturday's efforts we have some excellent irises available – this is just the time to get them planted. Sadly, I can only take an informed guess at the variety – probably Jane Phillips (labels again!)  - lovely sky blue as in the photograph. As well as being strong and reliable they are scented – not all irises are

It so happens that Monty Don did a recent clip on propagating irises. It is an excellent bit of instruction so rather than spin words here, I shall direct you to the expert: you can see the BBC video clip by clicking here

Looking at my photos, you will see that I follow standard practice in trimming the leaves. As Monty explains, you should only do this when propagating. It helps prevent the young plant being rocked by the wind. A truly worthwhile precaution as it turns out - Monday has been cold and blustery - not at all pleasant

So, whilst stocks last, you have a choice: freshly propagated Iris Jane Phillips (or similar) or a water iris seedling (Ensata or yellow flag). Please let me know if you are interested - we will be glad to help 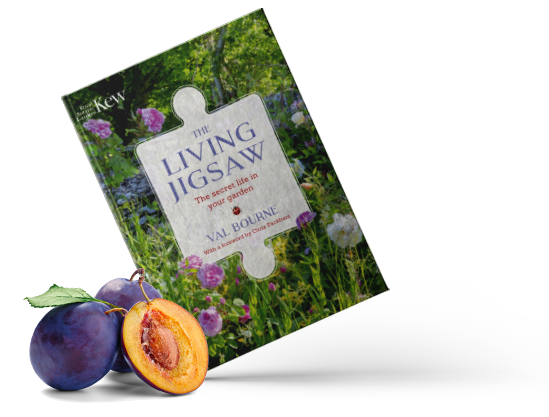 Good author
Having mentioned two famous gardeners – Monty Don and Alan Titmarsh – let me introduce Val Bourne. I think she would come under the category of garden writer rather than garden celebrity. Indeed, I have never seen her on television, nor have I heard on the radio but anything I have read of hers has been very worth reading

Her book Living Jigsaw is excellent – it explains how to garden organically and to encourage wildlife. The book has splendid photographs by Marianne Majerus. Val Bourne sometimes writes for the Telegraph. You might find her recent article of interest, click here to read it (you may have to navigate the invitation to subscribe to the Telegraph newspaper) 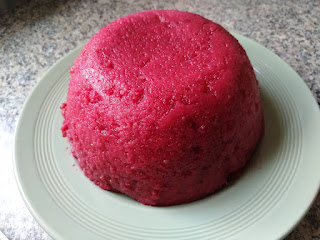 Summer pudding
Can you believe such a change in less than a week? It did not feel too much like summer yesterday but that did not stop us pretending. Having harvested a plenty of sun-ripened soft fruit we are currently enjoying the result in the shape of a summer pudding. In case you are not familiar, let me tell you about this delicacy which even rivals rhubarb and custard. Any soft fruit can be used. In our case we had lots of raspberries and redcurrants. Strawberries would also have gone in – but the crop was over. Instead we had a mixture of loganberries, tayberries and tummelberries. A bit esoteric, I know – the plants were a Christmas present a few years ago. In they went as well, and sugar added. Brought to the boil and simmered for a bit

Meanwhile, a basin was lined with white bread – a fascinating geometrical exercise – and the stewed fruit poured in. Made a lid of white bread and allowed to stand for 24 hours. Delicious. I could well be enjoying an extra helping whilst you are reading about it!

Here is a a few bonus shots. Both pairs show before and after 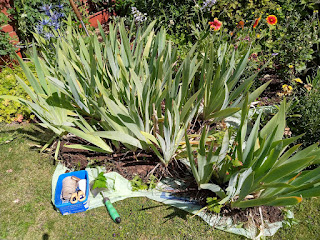 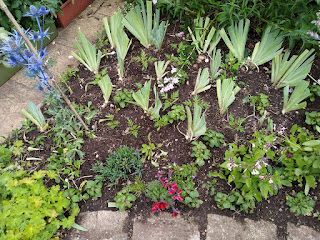 This shot was taken on Saturday. It is not quite accurate to say 'before' as work had commenced - it shows the operation mid-stroke. The first clump of irises had been lifted and set down on a plastic sheet to keep things tidy

The photograph below shows how the same corner looks today. Looks drastic, I know, but necessary. If irises are left to become congested then flowering is affected. The Monty Don video mentioned above is well worth five minutes viewing time. He does a really clear explanation of what is involved

Please do get in touch if you would like a pot of iris plants. I would like them to be shared around. There is another large clump waiting to be split so I don't expect to run short 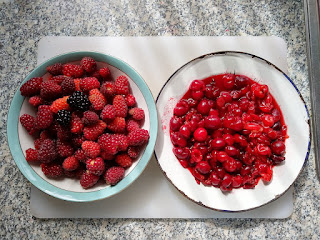 I forgot to mention cherries that went into the summer pudding. They are on the right, stones removed. I also forgot that a couple of blackberries were ripe enough to use. Had I got them, blackcurrants would be included, too. That was a result of another labelling error - I have two redcurrant bushes - must put that right

You can also see the loganberries, tayberries and tummelberries - not that they are easily distinguished 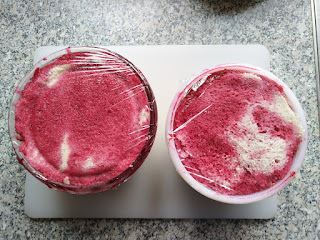