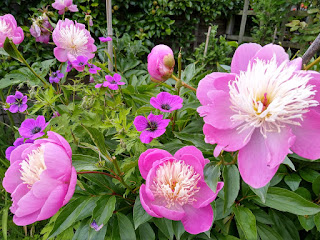 What with the warmth and the rain, everything in the garden is flourishing at the moment. My colour palette is most probably deficient, but I get drawn to the colours in this photograph taken yesterday. I was surprised to see our favourite peony (Bowl of Beauty) still trying hard and now accidentally joined by the neighbouring cranesbill as it reaches for the sky

And despite hard graft on Saturday we have not really caught up with all the jobs that need to be done. So, today’s blog will be on the shorter side, I think. We will hopefully be less rushed on Wednesday when I hope to do a round-up of some of things you also might wish to do at this stage of the season

It has been good to have contact with quite a few of our readers over the last few days. I would like to report on a couple of those conversations


Tadpole TCL
Reader Rachel derives great satisfaction from wildlife. In particular, she rears frogs and toads from tadpoles in her back garden. She has had great success using shallow containers and wants to speak up for that approach. I favour deeper containers, but she has found ways of getting excellent results using the standard under-bed sort that are readily obtainable. She makes the useful point that the relatively large surface area is an advantage in terms oxygen absorption. She observes that tadpoles, froglets etc need plenty of sunlight so that depth is of no advantage in that regard. Thinking about it, whenever I observed them in our own pond they are nearly always swimming around near the surface of the water rather than deeper down

I thought it would be helpful for readers to see her setup. She checks the temperature and shades the containers when it becomes necessary. She keeps the water fresh and uses dichlorination liquid so tap water can be utilised. Diet? Rachel reports they enjoy cucumber, mashed peas and fish flakes – supplemented by algae which they sort out for themselves! I wonder if Rachel’s neighbours realise the benefit they derive from her efforts. I imagine that the surrounding population of frogs and toads is increased significantly by her efforts


Frogs, toads and fish
I nearly got a good shot of a young frog on Saturday. But he hopped off too quickly so we shall make to with a picture of the stream itself (undergoing a bit of maintenance). As far as I have observed the frogs and toads get by happily in my setup although I did not notice quite the usual level of activity in this Spring. I have decided to monitor things more closely next year. A year or so ago I had major problems with leaks and was forced to change the way the stream works and lost a small upper pool in the process. It makes me wonder if, as a result, the tadpoles now have less protection from the predations of the fish. As we often mention, or hint, water equals work. Worthwhile work - but work, nonetheless. So, thanks to Rachel, I shall have another think about helping the tadpoles, frogs and toads in my garden 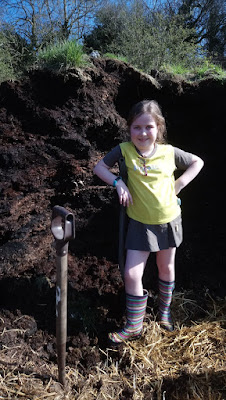 The Secret Mountain
Keith and Angela have also been in touch. It is they who, under normal circumstances, stage a charity plant sale just about now in the year. For reasons we know only too well, the sale cannot be held this time around. It was its enforced cancellation that spurred Codger into action – see postscript below. Last week, they did something that I have wanted to do: they visited, what I call, the Manure Mountain. In case this seems a grim prospect, I have dug out a photo from 2018.  Please excuse the apparent scene of enforced child labour - it was an entirely enjoyable endeavour. We came away with many bags of beautifully rotted-down material. (Perhaps I should add that since the Brownie has become a Girl Guide it becomes harder to enlist such labour!)

The story is a long one – no time to tell it all now. In essence, large stables produce large quantities of manure. In this case the stack (hardly an adequate word) is not only large but very mature. K&A’s garden, and mine, have both benefited. The owner of the stables seems pleased for folk to help reduce the size of the mountain, so I hope to reveal its location in a future edition

During lockdown it did not seem wise to pay my annual visit but now things are being eased a little I hope to get across. Perhaps I'll be able to speak to the owner. I also need to build some strength - humping the bags down the mountain might stretch me a bit. Anyway, watch this space ...

In the meantime, a couple of pictures will save a thousand words. Codger's greenhouse has a slab foundation (see photo left). A big decision: should there be a planting area? There are many pro's and con's. It is possible to slab completely and then use grow bags. We decided in favour of a planting border knowing that we would have to deal with heavy clay

Many, many bags of well-rotted manure later we obtained the result in the photo below. Hard work - but worth it. In our next blog post (on Wednesday) I plan to bring you up to date with the way it looks today now it is actually in use

BCM update
Despite many distractions, we do try to keep our overriding objective in view. Had the annual plant sale gone ahead it probably would have raised £1500. That seemed too ambitious a target for our own efforts but, as lockdown continued, we gradually raised our sights. You can check our progress to date by clicking here

We are so very thankful for your support. It would be great if you are able to help push us over the line, if you take my meaning

As usual, best best wishes from an old Garden Codger 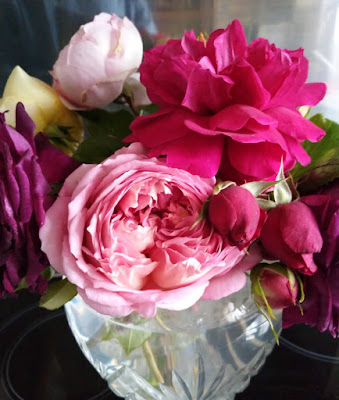