Blog posts tend to be haphazard things. I have sometimes toyed with the idea of working through the alphabet. P might prove to be a prolonged post. Just looking around our own patch we have: penstemon, pansy, peony, pelargonium, passionflower, petunia, and phlox – although phlox would hardly jump to mind. But primula would ...

As you read on, you will discover that I have still much to learn about these lovely plants - sometimes gentle, sometimes exciting 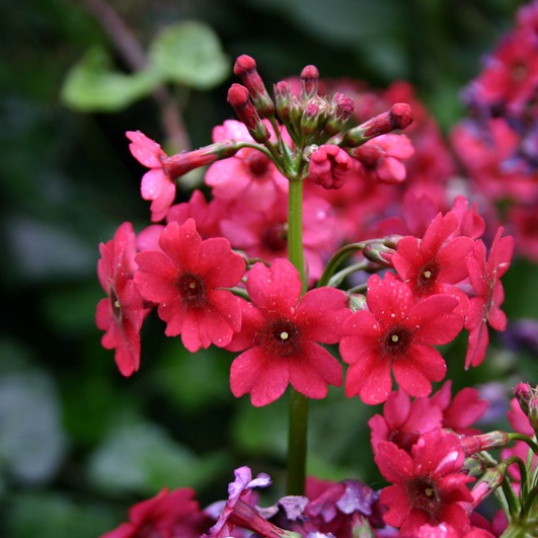 We have two types of primula growing between the stream and the pond. That position is virtually unshaded. Perhaps that accounts for their rather poor performance in the continual sunshine that we experienced this Spring

The denticulata (see photo above) looked a bit moth-eaten (actually, I fear, aphid-eaten) and the Miller's Crimson lost something of her normal intense colour. So, perhaps, I need to think about alternative locations

They should have been accompanied by primula viallii (see below) but that failed to show at all. In contrast, the primulas I had in containers on the patio looked spectacular – a commercial variety called Firecracker. It must be the old story – finding the right place for the specific plant

Propagating primulas
One thing they all have is common seems a bit odd. After flowering, instead of flopping, they seem to be bursting with energy

Although the autumn is the traditional time to propagate primulas it seems more sensible to do it now. They will have the summer period to get established - provided I give them the right conditions. Success will mean that I shall have enough stock to supply other gardeners next season

Whereas the rain is very much needed, the weather has hardly been in our favour for doing such jobs this week, but I did manage to get to work on Firecracker. Hopefully, the photos will help to make the method clear 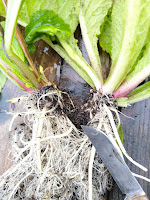 Step-by-step guide
Although it is possible to blindly chop the plant in half, I adopted a more cautious approach

First, removing the plant from the container, I gently washed the roots so I could inspect the plant more closely. Turning it around in my fingers and I found a point where it would divide fairly naturally. I then cut through the base of the plant and gently eased the two halves apart 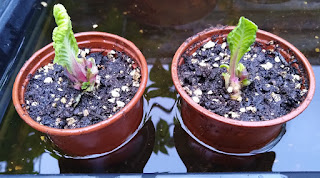 The photo (right) shows the two halves I obtained in this way. I also checked whether a further division might be possible but decided to play safe and not to make a further incision

Obviously, the final stage was to pot up and water well. Finding that the roots were too long for the pot, I trimmed them to suit and also removed the bigger leaves. They are now in a shaded position in the greenhouse

Since doing that I have worked on a couple more Firecracker plants - one smaller and one bigger - and I think it would be helpful to report. I found that the smaller plant was too small to divide. The larger plant had already started to divide so I did not bother to wash off the soil but simply followed the divide with the knife and potted up the results. Larger pots were needed. As soon as I have time I shall go through all my Firecrackers, dividing where possible, as well as looking how we might propagate the denticulata and Miller's Crimson. I will let you know how all it goes

Tidying hellebores
Propagation aside, there are always jobs competing for attention. Although not immediately productive, a bit of tidying has to be done. If you grow hellebores you might find that you can spruce them up in half-an-hour, or so. They are tough plants - and do a useful job in the dull winter months. But as the summer advances they can look a bit grim. I find this to be a get-on-your-knees job

In my case Japanese Anemones have invaded so I deal with them at the same time - and any weeds, too. Using secateurs, I cut the old flowers right back - stalk and all. You will find that old leaves go like dry parchment. Deal similarly with those and consign all the trimmings to the compost heap

Being dry and woody material the hellebore remains will help balance out the sappy green weeds that abound at this time. A reminder that, with all the rain, there will be plenty of weeding to you this weekend. This brings me around to our old friend, the garden compost heap. There is one thing I have omitted to mention so far in our various compost tales ...

Brandling worms
In my enthusiasm for hot composting I have probably played down the significance of these amazing creatures - brandling worms - see the photo I have taken for you (right). As the lower layers in a heap go cool, the brandling worms get to work. Their action produces a first class result. They differ from earthworms being both shorter and thinner. And have a different diet, delighting in half-decomposed organic matter - yum-yum!

As you may know, an alternative to a compost heap is a wormery. I have no experience of running one but understand you need something like brandling worms but a different species. You can even buy them on eBay - £6.20 and free postage!

The longest day – solstice and solace
In the northern hemisphere, the summer solstice, or longest day of the year, takes place between June 20 and 22 each year. This year it will be tomorrow, Saturday June 20. Here in the UK we expect to have 16 hours and 38 minutes of daylight. Codger tends to wake early this time of year but I do not plan to rise with the sun at 4.43am, however I may be among those who turn in at 9.21pm when it sets

And, although a lover of nature, I do not plan to join the growing number who seem to be attracted to a mysterious ancient religion that existed in these islands before Christianity was introduced. If there is a Creator of all things, it seems more sensible to worship him rather than what he has created. To me, that feels like turning to darkness rather than light

As I write these words the rain is hammering down again so I am very much hoping to see the sun again on the year's longest day. Obviously, we need the rain. Equally, without great blessing of sunlight, there be no gardens, no plants - indeed, no life at all. So, it is not surprising that that unique illuminating image appears in one of the most wonderful of Bible verses: For God, who said, ‘Let light shine out of darkness,’ made his light shine in our hearts to give us the light of the knowledge of God’s glory displayed in the face of Christ (2 Corinthians 4:6) 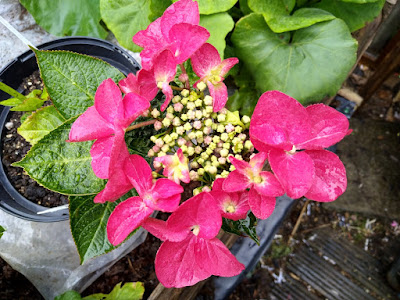 Thanks again to everyone for the great support we have received. It is good to know that our friends on furlough at BCM are getting back into harness - you can check that here. Yesterday alone, three donations of £20 each were received by Codger, pushing us very close to our final (!) target. We have also had gifts in kind - remember the hydrangeas? One has just come into flower - see photo right (sorry, it is already spoken for - just being minded at the moment)

One last thing. Google is changing Blogger - the software we use for this site - so I need to create a space next week for maintenance purposes. So, the plan is to publish on Tuesday, rather than Monday, and then again next Friday - hoping that will give an old guy time to smooth the rough edges

... your friend, the Garden Codger

PS - in case you were wondering about the material I collected from the Manure Mountain ...

The torrential downpour has interfered with progress with half of the bags still in the car. However, here is a sneak preview of the quality - lovely stuff 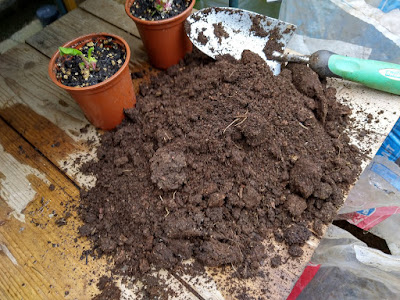