When I first heard of the Chelsea Chop, I pictured serried ranks of red-coated veterans, knife and fork at the ready, at some sort of regimental banquet. I had the right Chelsea but the wrong chop. Codger’s readers are a bright lot so you probably know that the expression refers to a technique whereby perennial plants are cut back in May – the time when the Chelsea Flower Show takes place (under normal circumstances, that is). In the past I have tended to be cautious about the chop, but now year-on-year mulching has done its work I’m a little braver. Even so, I do not chop back a whole clump. Rather, I give the haircut to about one third towards the back of a clump. This means I get a succession of flowers, extending the season – the point of the exercise. I strongly recommend caution for the first year. there's plenty of advice on the web - and videos - simply search on Chelsea Chop. You can read the official RHS take here

Do not chop!
The chop should only be done to herbaceous perennials like Michaelmas Daisies and stocks. Shrubs such as the camellia shown here should not be touched. Indeed, this is just the time to be looking after these plants. Just look at the bright, fresh top growth. Now is a good time to feed. This will build the plant up and give you better flowers next Spring

Now is also the time to get moving with tomatoes. Our first batch of Cerise (bush variety) are now spread around gardens in the locality. (One has even been delivered to Buxton) The next batch are now ready, along with several other bush types: Supersweet, Cherry Mix and Sungold. And only just behind we have lots of Money Maker due to the kindness of our neighbour who gave me seed when they could not be had for love nor money 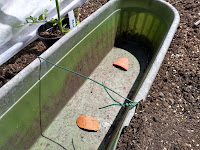 DIY Tomatoes
The best way to grow bush tomatoes is in a plastic trough. You may have an old one that can be reused. In any case, the shops open soon (with B&Q, Homebase, etc already open). A short trough will take a couple of plants – a longer one will take three 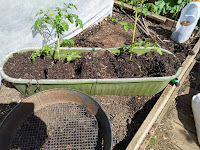 Before you plant up, make sure the trough has drainage holes – sometimes these have not been punched out. As in the photo, put some old crock over the holes and half fill with potting compost or the contents of a grow bag

If you look closely at the picture, you will see that I have wrapped a length of wire around the middle. This is to prevent the middle bulging out as the trough is filled. Not essential but it keeps things tidy. Plant the tomatoes but do not water yet. There's another job first. This is the best time to make a support to carry the prolific crop that will be produced. As you can see, I used bamboo canes tied together with string (below right) 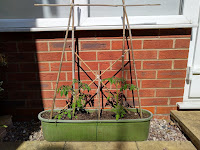 If you undertake this project with children they will learn much. We undervalue practical skills in this country. Again, do not water yet – the thing weighs a lot more when the compost is wet. Find a sunny position. I prefer against a wall as that not only gives general protection but you also have the benefit of a warm micro-climate (the bricks store heat during the day and give it out at night). Finally, water the tomatoes in. And don’t forget feeding Friday! (see earlier edition).  Please get in touch if you would like to have a tomato plant (or more than one - we have plenty)

Lockdown and wartime
Gardening gives you space to think. The coincidence of lockdown with VE Day stimulated a rash of good TV programmes about WW2. The best series I saw was made in 2015. The programmes featured veterans who spoke with deep emotion about their experiences – some for the very first time. Working outside, my mind has frequently goes back to childhood and the period immediately after the war when I was at school. I wonder if VJ Day will be commemorated (2 September). I had an uncle who was a Japanese POW – he never fully recovered from his imprisonment in Burma

Most of my secondary schoolteachers had served in the forces. Mr G taught us arithmetic. Although he never referred to it, we knew (as schoolboys do) that he had worked on the Suicide Railway – made famous by the film The Bridge on the River Kwai. He was a firm disciplinarian but, on the whole, a fair one. Some days we sensed that he was a bit shaky and were extra attentive to his instruction. I do not now remember what triggered the incident but, in one lesson, poor Mr G ‘lost it’. The culprit, if that is what he was, got beaten mercilessly. Emotionally exhausted, the teacher eventually left the room. We all sat in absolute stunned silence until the headmaster appeared and took over the lesson. The boy who had been beaten never complained – nor did his parents to my knowledge. Nothing was said. Both the boy, and the rest of us, forgave Mr G as if it were the most natural thing in the world to do

Rosa: Madame A Meilland
I was up early this morning, enjoying the best part of the day. Something caught my eye that took me out to the garden and, then, back indoors to add this piece. I thought today's post was already complete but now feel constrained to add this photo and these words ... 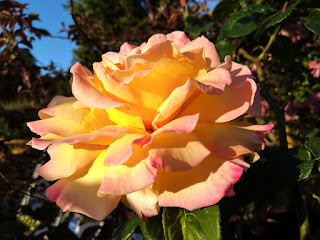 I had to climb to get this shot. (Very precariously, but no-one was there to stop me!) It is a rose that looks after itself except for when I wield the loppers in the autumn. I'm pretty sure it moved with us to our present garden in 1990 - the first rose we owned. At that time I thought it was a bush rose but subsequent history indicates otherwise. But the flower of this rose is unmistakable - probably the world's most famous. Until I checked just now, I had not understood the connection with WW2. The French grower named the rose after his wife: Madame A Meilland. Foreseeing the German invasion, Meilland sent cuttings to abroad just before the outbreak of war. Thus in different countries the rose was adopted under different names. With the cessation of hostilities in 1945, Meilland wrote to Field Marshal Alan Brooke and gave him the honour of renaming the rose in gratitude for his role in the liberation of France. Brooke (later Lord Alanbrooke) wrote back saying that his name would soon be forgotten. Instead, call the rose Peace - the name by which it is now known

After my climb to get the photograph - and, more particularly, the memory of the story behind this rose - I call to mind the words of Psalm 34 verse 14 - seek peace and pursue it

You can read the psalm here. We plan to be back on Monday - hope to see you then ...

... your friend, the old Garden Codger

Garden Codger
Garden Codger supports the Birminghan City Mission by providing garden plants to folk in and around Tipton. In return we ask that a donation is made online at www.stewardship.org.uk/pages/BCM Many thanks