I promised a look around the garden today. I would like to share some ideas that have worked fairly well - although often not perfectly

The rose shown here is Tess of the D'urbervilles. It is a low climber with an absolutely wonderful scent. Not surprisingly it was chosen by Mrs Codger who also had the big idea: put up a trellis to hide the bins. Dare I say it, it works well. The trellis measures 2m x 2m and is backed by reed screening. Without this the bins can be seen, rather spoiling the effect. In fact, I also found it necessary to also use a backing of black plastic. I had some by me and it has stayed good for six years or so


But there's a problem: the Lady has blackspot. There is no easy cure to this disease but we seem to have made some impression. Following advice last season we simply removed the infected leaves as they showed signs of the trouble. A drastic solution which we are repeating this season. We have found the new leaves grow back to replace those that have been removed. However, writing this piece has caused me to reflect a bit. I sense our Tess of the D'urbervilles is not a happy lady. The root run is under the patio slabs and rather restricted. So I wonder if she is hungry: Happy plants are healthy plants. I think a good feed is is order. I'll report back

Quick digression
A slight digression on the subject of bins. I think it is a real pity that the system is so undifferentiated. You never know, the Sandwell Bin Supremo might be reading this so let me presume to speak on behalf of others: standard bins are a big curse in small properties. Why can't there be small bin option?

Bog garden
I cannot pretend digging a pond is easy work but I can say that setting up a boggy area is relatively straightforward. The result is completely worth the effort as it creates conditions for a range of plants that will not grow well elsewhere. From left to right in the photograph (left) you have marsh marigold, hosta and mimulus. The very tall plant is ligularia. Behind this (see second photo below) are iris and bistort (persicaria) - plus a few camassia. Obviously, all of these prefer/require damp conditions

It need not be as big as ours but, in any case, construction is simple. Dig out the soil and put down used plastic bags (potting compost bags are ideal for this purpose). Pierce with a fork and and replace the soil. then keep moist! And a word about planting: go for a few bold plants. I had all sorts dotted around, at first. Just did not look right. In any case, the big boys soon took over. Speaking of mistakes, I ought to say something about the rockery ...

The cascade that did not work
I imagine we must have visited a National Trust property with a string of pools. Or, perhaps it was an expensive garden centre with an impressive water feature. Any, the project became a cascade of three pools, one feeding into the next. Actually, it worked to an extent but I quickly discovered that I ran the risk of exhausting the entire supply from the South Staffordshire Water Company. Cascades = leaks. So, after many attempted solutions the cascade became a rockery. More to be said - my track record on rockeries is not good. But the photograph below indicates a sisyrinchium  is happy 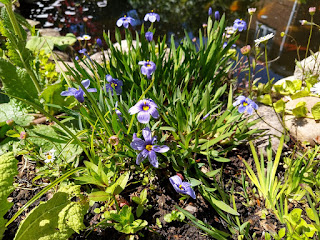 Feeding the birds
I have previously mentioned the value of having birds in the garden. Like amphibians they help keep down the pests. Having tried putting the feeders in different places, we discovered the obvious trick. Site them near cover. In our case, a cherry tree.

And another reminder. Encouraging frogs and toads also helps keep down the pests. Our big hosta is hardly touched by slugs 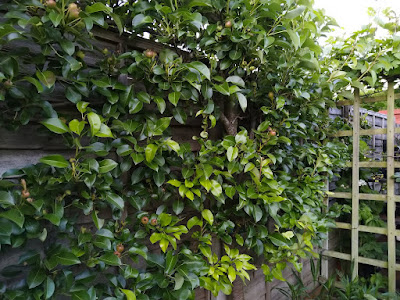 Final shot
Before we sign off, let me show you our pear tree. It is looking in particularly good shape this year. It is trained against the fence in order to save room, espalier fashion. Much easier to do that anyone would imagine. Last year it cropped poorly - so, here's hoping

We have hit a period where there is much to do and, despite lockdown, not enough time to do it in. So, apologies in advance, we will be fully occupied away from the computer on Wednesday. However, we plan to be back here on Thursday with a few more hints and tips. Plus a little progress report. Hope to see you then ...