Hardly the sort of photograph that usually features in this blog but it marks a celebration. For twenty years Garden Codger has grumbled every time he passed the vandalised shell of Cavendish House in Dudley. Surely the worst eyesore in the whole of the Black Country. Thanks to Dudley's ambitious regeneration plans the demolition was, despite the imposition of lockdown, completed last week. It is now a pile of concrete being crushed ready for recycling

We saw the pile on Monday when making a socially-distanced delivery of strawberries to an old friend bereft of any hope of Wimbledon this year. We refer to the lawn tennis, of course. The strawberries were grown in Codger's greenhouse, see below. On the journey to Rowley Regis we not only noted the open sky previously disfigured by the derelict building but other encouraging signs. More cars on the road than expected and signs of life in local factories. The modern Black Country is characterised by small and medium sized engineering firms. It was heartening see some return to business. Perhaps they were fulfilling back orders. If so, may new orders come in and revive the economy . A huge challenge and I feel for young people facing a challenging and uncertain future

Hanging baskets
Speaking of orders, the photograph (right) not only shows the strawberries doing well but some of the flowers that will be planting in hanging baskets. Recently, I was able to secure a source of good quality baskets. A neat design that will take 15 plants around the sides, in three tiers of five, with five more planted in the top. So that is 20 plants altogether making a full and impressive display. Our favoured plant for this job is the training petunia - there's one in the picture. Also available will be osteospermum and lobellia - again in brightly coloured trailing varieties. We will let you know when the hanging baskets are ready


The Venice of England
Having mentioned local industry in our introduction, I cannot resist drawing our readers' attention to Tipton's prowess in this country's industrial history - an interest of mine. Did you know that Tipton is the Venice of England? It is impossible to pass in or out of Tipton without crossing a canal. This was a shock when West Bromwich took over control of the borough in 1967 under the boundary changes. The Chief Engineer commissioned a survey of the bridges and discovered that none of the main canal bridges met the contemporary safety standards. This could have become the original lockdown. Subsequent boundary changes (1974) meant that Tipton became part of a new entity: Sandwell. Dudley, Wolverhampton, Walsall and Sandwell together make up the Black Country (in rough terms - there is no exact geographical nor political definition)


The Aaron Manby
Another 'did you know?'. Did you know that the first iron ship in the world was manufactured in Tipton? Almost ironic (pun intended) since you cannot get much further from the sea than Tipton, not only in the heart of the Black Country but at the heart of England. The vessel was made in prefabricated parts at the Horseley Ironworks, taken to London in bits, assembled and launched in 1821. You read it here first!

Our nuclear sub
It was 25 degrees yesterday and I managed to get a rare shot of our largest fish. He was but a tiddler when we moved to our present garden in 1990 (he moved with us!). You can see him here. Lining him up by eye with the edging slabs I make him 36" long (90cm). Visiting children are always fascinated and enjoy feeding the monster. He is the colour and shape of a nuclear submarine. In case you are wondering, he is a Ghost Carp - a rather productive one judging by the number of small black fish around. Actually, that makes me wonder - is the he a she?

Oh! dear. Old Codger digresses. Please excuse me. And, I've only done the Home bit! So, with my apologies, we will do Away story tomorrow. We'll be off to Holland for that - remember the Rosarium? I wish to tell you more

But before we disappear, I should mention something about the bush tomatoes that we are supplying at the moment. The variety available, Cerise, is a prolific cropper. we can supply them in a big pot if that suits. However, a good way to grow them is in a trough such as shown in this photograph. Note that I have constructed bamboo supports. You will find that something like this is needed to carry the weight of tomatoes you are likely to get. There, we've brought things back round to gardening! 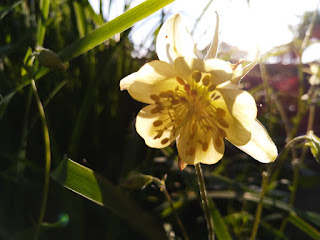 PPS - apologies - more problems in the Blogger engine room. This should have gone out first thing this morning. However, today's news from Rolls Royce sadly underlines the point in the introduction. Many small Black Country firms are in the supply chain
Posted by Garden Codger at 02:28