I miss not seeing larger rhododendrons such as those at Dudmaston. We have just the one – only purchased a year or so ago in memory of my dad. He was a village lad who left school at fourteen. Worked on the railways all his life – including his wartime service in the Royal Engineers. He died from a stoke one week short of retirement at 65. The rhododendron is named Percy Wiseman – so that tells a story (my dad was Percy William Smith). He had two ambitions for his son. Negatively, to have a job that did not involve shift work (“ruined my digestion, son”) and, positively, to get an education. So, I look at the Percy Wiseman when it is in flower say "Thanks, Dad" and from my heart, "And thank you, Lord"

Why don’t you invent something?
From father to wife. I confess to be the sort of person who fiddles with things. Mrs Codger’s comment was uttered when I had the washing machine, toaster and motorbike engine all apart at the same time. (I should add this was in the early days of our marriage.) Well, it now appears that I may have invented something – or, leastways, a system. Out of all the topics we have covered so far, the one attracting most attention has been my way of recycling plastic milk cartons. Allow me to explain more fully ... 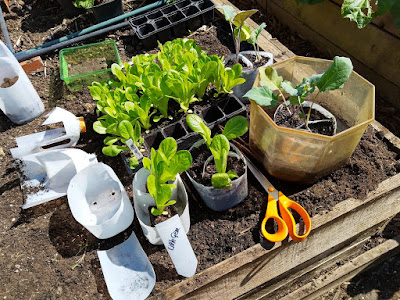 Codger’s method
We never throw away milk cartons – not even in the recycling bin. Instead, I wash out with a drop water. Next, I fill to the brim with clean water and tighten the cap, storing the filled carton under the bench in the greenhouse. Bonus result: absorbs heat during the day and gives it out at night thus evening out the temperature. This practice accounts for the large reserve of cartons I have to hand. No greenhouse? Just store them anywhere out of the way. Then a plant never need dry out – you will always have water to hand

When needed, convert the carton into a pot as shown in Monday’s post. Now, you may have spotted a couple of issues here. First, a 4-pint carton yields a one-litre pot (nice mix of measures!). This one-litre size will quickly gobble up your potting compost. Answer: pot up two plants side-by-side. Simply separate them with a slice of plastic from the discarded top half. Second, what about the rest of the discarded top half? Answer: cut it into strips for use as plant labels. I reckon that way about 80% of the material is recycled for use in the garden

A neat and natty idea?
You may think so, or maybe not. But let the Garden Codger tell you this: there is a whole nation, not far from us, that is neat and natty: the Dutch! They are orderly and thoughtful in an almost unconscious way. Apart from anything else, they keep the sea out which means that they have to be organised. Friendly discipline seems bred into them – witness the relative Dutch success in the current crisis. So, it is hardly surprising that they make good growers (and sellers of what they have grown!)

Our friends live in Boskoop (pronounced Bos-kope – rhymes with ‘hope’). You may have come across the name in garden centres. For example, there’s a grape called Boskoop Glory. Boskoop is the centre of one of the main growing areas in Holland. Walk down the main street and observe, on one side, immaculate large houses one after another. Each has a manicured front garden, and at the back a long thin strip of land bordered by a canal. Each of these nurseries specialises in growing a specific plant – conifers, roses, azaleas and so forth. All is amazingly clean and orderly. Each owner knows their own business – in more than one sense. Near the railway station is an historic Rosarium which has benefited from the recent attentions of our friend, Jan den Haan, a retired nurseryman. More on that project next week

I cannot finish without mentioning three other aspects of the Dutch character: nearly everyone speaks English (well), they actually seem to like us Brits, and they are enduringly grateful to the Allies for their liberation from foreign occupation 75 years ago. They suffered terribly following Arnhem, remembering it as the Hongerwinter. No need to translate that. We began with thankfulness so we can end with it, too, as we reflect on V for Victory on this historic VE Day

Enjoy Victory Europe Day – come back next week. There will be more about plants, more gardening tips and a bit more about the Netherlands

Best wishes from your old friend, the Garden Codger

PS - You must see this: the cheese shop in Boskoop 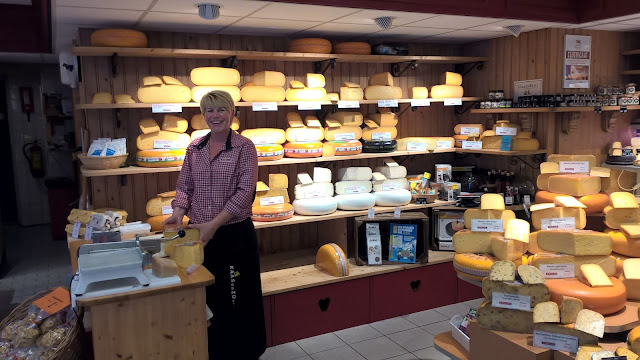