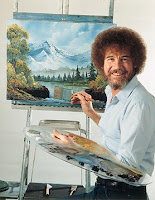 I wonder if you have seen any of the Joy of Painting programmes on BBC4. If so, you will know the strapline: no mistakes, just happy accidents. Perhaps an overly optimistic view of life in view of present circumstances but it’s a good one-liner for a nervous novice aspiring to be the next Rembrandt. And, also appropriate for any gardener who want to grow well. You can only learn by having a go. Gardening could be defined as the art of perfecting trial and error

I no longer grow potatoes – they take a relatively large amount of space and they are, in any case, remarkably cheap at any supermarket. However, I used to grow them and found, almost by accident, that they have a great extra benefit in addition to feeding the stomach. As a garden crop that are really good at breaking up the soil – even heavy clay. When we moved house in 1990 we discovered that our new a garden was seemingly constructed of concrete

Over two or three previous centuries the land had several industrial uses. Huge machinery was used the clear the site (Patent Shaft Steel Works) and ‘soil’ was brought in. This material was a mixture of clay and ironstone. Heavy graders then compressed this to a hard pan. Our neighbours, both sides, hired Kangos to break theirs up. I persevered with a pick and planted potatoes – a happy accident – I could not think what else would grow 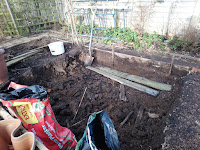 You can get some idea of how bad the clay was from this photo taken a couple of years ago. It shows the foundations of the greenhouse being constructed. You can see what I mean by ‘heavy clay’ - in this case, industrial strength heavy.

But, going back to the nineties, the potatoes did their job. Subsequent, less accidental, measures have assisted in producing a reasonably productive soil

A few weeks ago, I noticed leaves poking from one of the raised beds. Recognising these as belonging to a potato I did not have the heart to pull them out. But I did poke around a bit and could see that this was merely surface growth. So, an experiment. I have ‘caged’ that little area and piled on some woodchip, being too mingy to spare good soil. The woodchip should rot down over the next few months, so I wait to see if we get a crop of potatoes from this happy accident. Which brings us back to Bob Ross. Some happy accidents can be quite beautiful (see below) but, certainly, not all. I constantly need to learn to learn from the disasters as well as the successes

Before I sign off I ought to mention that work on the nursery will keep me away from the computer tomorrow. But I hope to see you on Friday – VE Day, of course. And, appropriately, that is when we will pay our first visit to Holland. They celebrate VE day every year – and do so very conscientiously over two successive days, in fact: May 4 is Dodenherdenking (Remembrance of the Dead) and then May 5 (yesterday) is Bevrijdingsdag (Liberation Day). Over here, it is often assumed that the Netherlands was liberated soon after D-Day. Not so, at all. Due to the sad failure of Operation Market Garden (Arnhem – the bridge too far) much of the country remained in enemy hands until the end of the war – and very tragically so.

So, hopefully, see you on VE Day: best wishes from the old Garden Codger