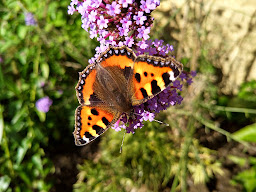 We are back home after a couple of nights away. After the long months of lockdown, it feels more like two weeks away, possibly because we enjoyed it so much

The Verbena Bonariensis shown here is growing in our daughter-in-law’s garden and proving to be something of a magnet to inspects. That is particularly pleasing as this is one of the plants supplied by old Codger’s Nursery, although I cannot claim credit for the gladioli that were looking particularly gorgeous while we were there

Flowers tend to bloom rather later in Buxton which has a climate all of its own. We always notice the temperature drop but, mind you, it is 1000 feet above sea level - the highest town in the country. Nearby Flash is the highest village in Great Britain (not just England) and that stands at 1500 feet

We love the Peak District and were both surprised and delighted when our older son moved there a good few years ago. My own connection with the town goes back to the early eighties when I attended a conference there at one of Buxton's many hotels. Among other things, I was struck by the architecture which, in some respects, is somewhat reminiscent of Bath. On this visit we were pleased to see that the overdue restoration of the historic Crescent was complete – work was still in full swing on our previous visit in January 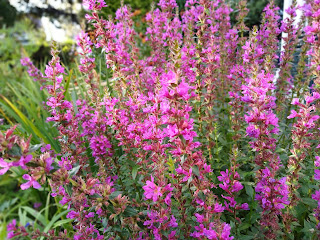 Patching it up
Our son’s property is nearly 120 years old. By its dimensions, it looks as though the lawn was originally a tennis court. There are two main borders along the long sides – a shade border and a border in full sun – so plenty is stretch my limited horticultural expertise. As our daughter-in-law has become more interested we have helped by supplying some of the plants (only some – these are long borders!). This Liatris being an example. All useful experience as the conditions in Buxton are different to what I know best …

A slight digression: I mentioned that Buxton has its own weather - if you take my meaning. I learned only this week that a local enthusiast (Michael Hilton) runs his own local forecasting service. Is this unique, I wonder? It is quite fascinating – click here to see it

I would imagine that is really useful to hill walkers – and also to road users when the Cat and Fiddle route to Macclesfield becomes dodgy in the winter. Four-wheel drive is quite common in the Peak District

Back to the garden
A couple of large bare patches in the lawn needed serious attention - a result of earlier work in the garden
It was surprisingly difficult to source good quality turf. My son tracked some good stuff down on the other side of Alderley Edge in Cheshire (that's the area where rich footballers live; however, the turf was reasonably priced). Halfway through the job the weather turned, and we were in danger of wading through a quagmire

Mercifully, were granted sunnier weather on Thursday and, with a fair wind (literally), what had become a mud patch dried out sufficiently for work to continue. So, we were able to complete laying the turf before we returned home on Thursday. Job done and customer satified (I hope!) 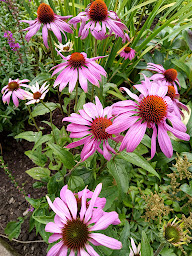 Useful flower
Whilst I think of it, another flower that was showing up well was the Echinacea I planted last year. I mention this because I am growing some more and a few are available now if anyone is interested. It is not necessary to wait for the Spring. There is plenty of time for the plants to establish before winter. Although they will appear to die down, being perennials, they come again next year giving a useful display in late summer and on into the autumn. Just let me know if you are interested

The variety is Echinacea Purpurea Primadonna. As the name suggests the flowers are purple, so it is sometimes called the purple coneflower. They are very attractive to insects, especially bees 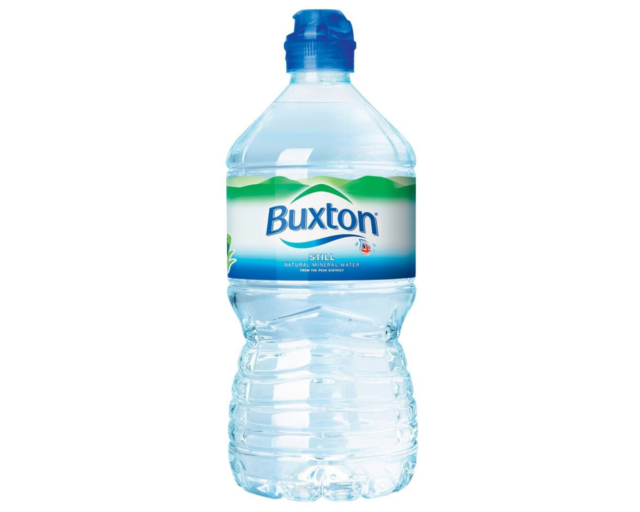 Do you drink Buxton water? You will certainly have seen it on supermarket shelves. The natural spa in Buxton is what accounts for its passing resemblance to Bath

The renovation of the Crescent was beset with any number of problems – mainly financial. The funding hit several setbacks and was, no doubt, complicated by Nestle’s acquisition of the mineral rights in 1992

The total cost has been huge – in the region of £70million (mind you, since Boris has been the Prime Minister staggering numbers don’t seem staggering any more)


The financial crisis in 2008 did not help the project (mild understatement) but there have been technical problems, as well

We have followed the progress blow by blow over the years. On an earlier visit, I remember seeing a contorted assemblage of huge stainless-steel pipes appear at one stage and wondering what it was. I should have guessed: bottled water! Or, rather, the equipment to get the water piped to the new bottling factory on the edge of the town


Along the way, the original intention to convert the vast Georgian property into apartments was abandoned. Since the turn of the new millennium the plan has been to develop a hotel and spa complex

The work was, at last, completed earlier this year only to run into the Covid-19 crisis. However, Codger is pleased to report that he saw hotel staff preparing the renovated premises for opening only this week. Bookings are being taken – click here!

On my reckoning the cost works out at one million pounds per room. Even if I have got my sums a bit wrong you would be staying in a million-dollar and million-euro room! (Of course, the money was spent on more than rooms – there’s a rooftop pool and lots of different spa treatments etc etc). Now, should they be offering Bargain Breaks ...

With that in mind, let me tell you about three bargains. First, you can get Buxton water for free. Under the 1772 Enclosure Act the local authority is obliged to maintain public access to the natural spring water. Just turn up at St Anne’s Well with a container (only the still version available!)

Second, you probably know of retail outlets called The Works. Among other things they sell end-of-line books. Whilst browsing in Buxton I came across several gardening titles. Included was a book by Monty Don which set out something that had puzzled me. Although very similar redcurrants and blackcurrants are entirely different in their demands. You will not get good blackcurrants unless they have lots of sunshine and well-fed soil. The red version is relatively undemanding in both areas

Third, some good plant bargains at Asda at the moment – including some nice grape vines for just a fiver (several different named varieties)

Hope to see you next week
Well, that’s all for now folks, time is up. We came back to a roaring compost heap and the sad result of the latest heron strike. If there is space, I’ll tell you next week

Reader’s photo
Having obtained the owner’s permission, here is a glimpse of Tipton’s premier bijou garden. Thanks, Hilary - she says, "I thank the Lord for it. I love every inch of it - and so do the birds". (A number of the plants supplied by a certain local nursery!) 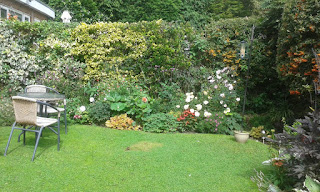 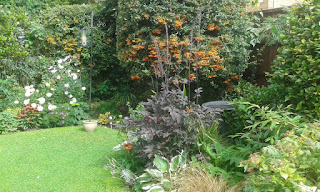