The week draws to a close with the same brilliant sunshine that started it. However, with a marked drop in temperature. We are promised 13 degrees today - on Monday we had fully 25 - and there's a wind chill, too!
The vegetable plot has been productive, but my main attention has been potting on plants for next Spring in the hope that clients, old and new, will be interested. There's a bit more about that later on in today's post
However, the warmth on Monday drew us out of our own garden. Reading that the autumn equinox would coincide with cooler weather we decided to grab the chance for an excursion – our first National Trust visit for at least a year
We are NT members and glad that our annual subscription has helped, albeit in a tiny way, to support the charity through the enormous financial challenges of lockdown. We are told that the reduction in income this year amounts to £200million!
Booking is now essential so we decided to head for whatever property within an hour's drive had an available slot
That turned out to be Baddesley Clinton in Warwickshire (Radio 4 Archers' country). As expected, we found strict Covid safety measures in place and observed that visitors were very good at keeping to them. The house (which looked inviting) was closed but we were able to enjoy the park and gardens
A notice explained that lockdown measures had forced the furloughing of three of the four gardeners so things were not as good as they wanted. Well, who minds a few weeds? The display of flowers in the border was magnificent in the autumn sunshine so I took a few photos for you. See here and at the end and as a postscript
Whether a another trip will be possible, we do not know. We certainly enjoyed this visit. Restrictions allowing, we would love to get out again. One blessing of living where we do is that we are within easy reach of many properties under the care of the Trust. The nearest are Wightwick Manor (great for Arts & Crafts) and Moseley Old Hall (where Charles II hid after the Battle of Worcester)
Midland counties
Mr and Mrs Codger met each other in Worcester and originally intended settling there in that shire. But other things were wisely intended for them. We still enjoy the county – and neighbouring Herefordshire – joined (or separated by the Malvern Hills)
The hills arise from nowhere and can be spectacular in the autumn so, perhaps, romance will draw them back as the trees turn to gold
Baddesley Clinton is in Warwickshire – not far, but a county we know less well. This is probably because, geographically, Birmingham is in the way. On Monday a road closure meant that we saw more of the county than planned!
It is much easier for us to get out to Shropshire - an immediately adjacent county to the west. We have our ‘own’ walk just 35 minutes’ drive from here (see next item below)

Our home county is, administratively speaking, the West Midlands. But old attachments die hard. Our original married address read: Tipton, Staffs. Staffordshire is a much larger county than many realise, especially south to north – the way we think of it. In the south you have Kinver and, in the north, the Staffordshire Moorlands and the better-known Peak District. We enjoy the drive to Buxton, which is just over the border in Derbyshire. So, we are truly spoilt for choice

Our very own walk
Perhaps we should not give away its exact location (!) but our 'own' walk has its link with the neighbouring Black Country - where we live, of course
It is a story of local boy ‘dun good’. Market trader, Keith Smith, made a million (or two) from a cash and carry business and became a tax exile. Along the way he gave his son, Steve, the idea behind the Poundland empire - so there is a bob or two in the family (well done Smiths!). Steve also learned his trade on a market stall (West Brom and Bilston, I believe) so, really, it’s a tale of local lad and son dun good
Mr Smith Senior bought an grand property in Shropshire which, by all appearances, he tends with great care. The residence is understandably closed to the public, but he and his wife open it up once a year (lockdown prevented this year). There is a handy parking place for our walk which is conveniently located nearby and runs along the edge of the grounds

There is an interesting historical twist to the tale. Mr Smith’s property was rebuilt in its current grandeur 150 years ago by another Black Country entrepreneur. This Victorian gentleman made his money from the Baggeridge brickworks in Sedgley which is just up the hill from Tipton

Tipton wildlife
Mind you, we do not have to leave our own urban garden to experience a bit of wildlife: two incidents to report ...
First, the heron – or, rather, herons (plural) – our neighbour reports no less than three along the nearby canal. I woke the other morning with my heron sensors twitching. I got to my study window in time to see him take and swallow a fish

It was over in an instant – one seamless, swift action – the result of much practice - largely at my expense, I fear. However, there is a limit. So, I have taken a new measure: strong, black unbreakable thread. I have stretched a line across the vulnerable spot where you see the varmint posed in the photograph. The line is almost invisible when stretched out. Will it work? We wait to see

Then, in last week’s hot spell – the sound of mewing. Repeated, and rather like a cat - but louder. Four birds circling above – I assume two pairs calling to each other. I think they are buzzards. Later, on Monday of this week, we returned from our day out to find feathers scattered across the lawn – clear evidence of a kill. They were pigeon feathers

So, this may have been evidence of the buzzards but, equally, it could have been our local sparrowhawk. We see a pair quite often eyeing things up in our garden where a feeder attracts possible prey. I rather fear for our friendly robin who keeps me company quite often these days. Hopefully, the pigeons, of which there are plenty, will continue to provide a more substantial meal

Not usually associated with plants intended for the garden, IKEA can surprise. This time of year, they sells chrysanthemums as houseplants – a fiver a go. these are nice plants and I suspect these are from Dutch nurseries which achieve a good effect by multiple planting
Look closely, and you will find that what appears to be a single plant is, in fact, five individuals planted close together
I have found that once they have finished flowering, they can be split and grown on separately – many of my patio chrysanths started out this way. Worth a try, even if you get a pot elsewhere – check if you have a multiple planting. Don't bin them when finished - keep moist and protected - then split and pot on 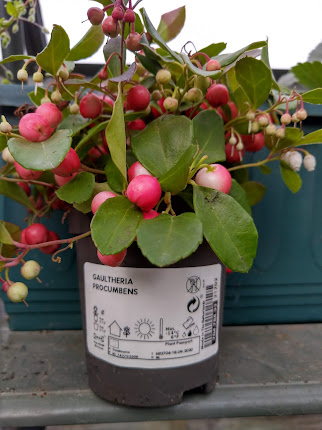 The same company also sells Gaultheria for a mere £1.50 – cheap, but a bit of a waste in my view – they will soon shrivel up in most centrally-heated homes
The label is the give-away – OK down to minus 14 degrees Celsius! far better to plant them out in the garden for autumn/winter interest! White berries turning pink then red
I imagine that IKEA sell them as a sort of holly replacement - a Christmas item. Anyway, I know from experience that you will get a better result outside
Apologies
We have hit a problem with number of technicalities in creating this post. Old Codger struggling with Google's new blogger software! Sorry about this. Easier to post what I have done and send the remainder later ... ...
... so best wishes for now - look out for Part Two!
Your old, and befuddled, Garden Codger
Posted by Garden Codger at 05:36