E is for eBay!

You might have expected that E would be for Echinacea. Certainly, one of the most useful of border flowers, especially near the back. Looks good and is attractive to insects, especially the pollinators that are so necessary in the garden. And, I'm glad to say, that we have some plants coming on well that are available to our readers for the asking. But there is a really sound reason for focussing on eBay rather than Echinacea

The reason is to do with the support for the Birmingham City Mission that we are keen to promote through this blog. If you are a regular reader you may remember that the Codger initiative grew out of the annual charity plant sale run by Angela & Keith Webb. As it became obvious that lockdown would rule out the sale this year, I started wondering what else might be done, especially as I already had plant stock lined up for the event. You can find more details in an earlier blog post – click here to find out


But has this to do with eBay ? Well, not only does Keith do a great job serving tea and cakes at the plant sale but he is also something of a whizz on eBay. And, where do the proceeds go? You’ve got it – to BCM. Every penny. It is a story well worth telling so here is our interview with Keith …

GC: Keith, I was amazed when I discovered the scale of what you are doing. As you know, you have had items from us as we de-clutter and pass them on to you. You have told me when some items fetched a good price on eBay. (See photo left. We found a vase like this in an unopened box that had belonged to my mother. On investigation it turned out to be Crown Devon Matta Sung.)

GC: Keith, I was amazed when I discovered the scale of what you are doing. As you know, you have had items from us as we de-clutter and pass them on. Some items have fetched a good price on eBay. But let me check. Am I right in thinking that all the money that comes in goes to BCM to support its work?

KW: Yes, eBay kindly waives all fees for charities, so every penny goes to BCM
CG: How much did you raise on eBay in this way last year? And, what is it that you are selling?

KW: Last year was £18,642 a little down on 2018 which was £22,601. We sell anything from a small silver three-pence Victorian coin up to an adult tricycle. As long as it is in good condition and is of some value we will try and sell it

CG: That is staggering - over £40,000 raised in two years! How are things going this year? Has lockdown been a problem to you?

KW: Well, to be frank, I find it surprising. We are still getting around the same sort of amounts as previous to lockdown. I did stop eBay at the beginning as I fell into the "old folks category". But then, after about three weeks, I found a courier who would collect from the door so started selling again. Since that point I have sold in excess of 600 items. It seems that I have a captive audience!

CG: Let me get a better feel for this. What about items that you think are not suitable for selling on eBay?

KW: Well, it’s true; there are some items that are not really suitable for eBay. These go to the BCM charity shop – this includes the clothes that are donated. Angela sorts these. Some go on sale; others still get sold but as rags – this still brings money in. Then there is bric-a-brac just like any charity shop

CG: Do you ever get offered items that are too good for eBay, if I may put it that way?

KW: Yes, it does happen from time to time. We had three items last year that we took for sale at auction and raised a considerable amount--well into five figures

CG: This is sounding like Flog-It! What would you say is your best find?

KW: We do not really have "finds" but often folks are surprised at the money raised. I sold a "Patch" nine-inch doll a few weeks ago. Patch was the 1970s younger sister of the Cindy doll who is far better known. It sold for £255 plus postage to the USA. Another sale was of a 1950s darning set. It was very basic and no bigger than a pack of playing cards yet it sold for £115. It went to a collector in Germany. It had been left for me by someone at BCM just out of interest

CG: So, everything taken together – over the years – have you any idea of the total amount?

KW: Well, let’s say that over the last eleven years we have sold quite a lot. However, it is only a small contribution to the running of BCM. Although the paid staff work sacrificially, the Mission needs up to one million pounds a year to carry out its work. And, don’t forget that volunteers supplement the manpower in the mission

CG: Well, the whole thing is a story worth telling. I imagine selling on eBay must be exciting at times. But, I suspect, hard graft, too. Is there a part to the job that is less enjoyable?
KW: Yes, at times it is hard work and it has become almost a full -time job. Exciting – yes, when in the last few moments of an auction on eBay the total goes well above the expected amount. I suppose there is a slight downside. Sometimes people think they have an item of great value when, in fact, it isn’t worth a lot. I am the one who has the break the news!CG: So, what keeps you going?

KW: It is the Lord's work and not mine. Something I believe I was prepared for but that is another story. He keeps me going. And, if I may, I would like to thank everyone who donates items and those who help me out by saving boxes, jiffy bags and other forms of packaging. We get through a lot in a year!

[Editor's note: we are very grateful to Keith for giving the interview. We know that he prefers to stay, unnoticed, behind the scenes. And please excuse some formatting errors - see the postscript below]


Back at Codger’s Nursery
This is the time of year when those plants that have finished flowering can leave a hole in the border that would be better filled. Here are a couple of suggestions: 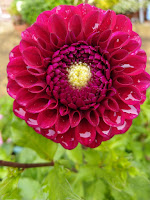 Dahlias are only just beginning their long season. Here is one of mine looking great in the recent rain. I took lots of cuttings earlier in the season so have a number of young plants available. There is a range of colours including a deep red and a lovely apricot. Have them now – you can leave in the pot – or plant out next month. They should flower on into the Autumn after which the tubers are best brought in for protection

Rudbeckia. At the beginning of lockdown we had a run on Rudbeckia - I was surprised at their popularity. They are bright, sunny plants. And, again, they will go on flowering right into the Autumn. We now have an excellent variety called Prairie Sun (see photo below). These are strong plants, promising lots of colour, and ready to add to the border now 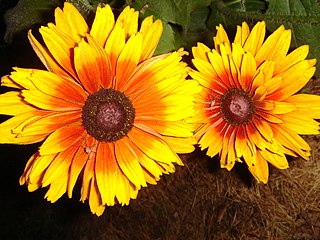 More coming on. We have lots more plants growing fast and available whenever you want. See the photo at the end

Iris Jane Phillips. Nearly all the iris I lifted have been claimed. Just a few left. Obviously they won't flower this year but now it a good time to plant them as they need the summer heat this year to flower next 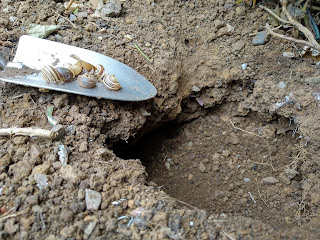 New evidence!
Following up on the wildlife mystery. The photo shows the other end of the tunnel (about seven feet long). Something like a chamber with roof fallen through. Also snail shells as though that was part of the diet). Any suggestions for the erstwhile occupant?

Well, we are almost out of time. I do hope you have enjoyed learning about Keith's contribution to the work of BCM. I've been wanting to tell that story for some time. Incidentally, Keith and Angela are hoping to re-instate the charity plant sale next year

[Postscript: I lost some time this week in both the garden and with the blog. Just as we were going to press on Tuesday morning the pond pump tripped. This turned into an emergency as water circulation is essential to the health of the fish. It helps oxygenate the water and also remove impurities. The pump problem coincided with Blogger playing up - I have to switch between old and new software versions to get an acceptable result. (Hence trying different typefaces to work around some of the problems.) Please bear with me if the next post is behind time. Sunshine now promised, so I need to seize the opportunity to do essential pond maintenance.]