I just cannot believe that a month has passed since my previous blog ...
Well, actually, I can. May is not just an especially busy month in the garden but, with what amounts to his own nursery, Codger gets overtaken with the surge and quantity of growth. Then, just as we are taking breath, the tomatoes are ready to be potted on and then shipped out to our 'customers' - more below
But before we deal with that we must stop to rejoice in the floral abundance we have around us. The arrival of the irises marks a real advance in the season. We love to see them - and, with the variety we grow - to smell them as well
Incidentally, although most young plants have now gone, there are a few left. The big thing with irises is to plant them correctly. They love to bask in the sun with their basal rhizomes exposed. No flowers? This most probably means that they have been planted too deep. The base of the plant needs to be exposed to the sun so that get a baking
Although the invidual blooms are lovely, they are best planted in drifts. That is their natural habit, of course. The rhizomes quickly multiply and will need lifting every few years. They can then be split - you can soon have a garden full of them! If you watched the last Friday's edition of Gardener's World you'll see what I mean. You might also trawl back over editions of this blog to read about lifting and splitting
Speaking of Gardener's World, you may have noticed that the BBC have promoted the Scottish equivalent, Beechgrove Garden, to Friday night viewing. In fact, the two programmes are now broadcast back-to-back. Rather odd programming, methinks. But the styles contrast and both are good in their own ways (but Codger has a soft spot for Beechgrove!)
Turning from TV to radio, I sometimes listen whilst I'm working outside. Like many readers, my attention at the moment is constantly on the situation in Ukraine. Want some historical perspective? Read on ... 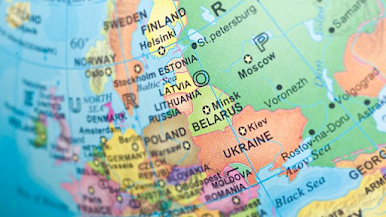 Tuning in
I recently listened to a fascinating series on BBC Radio Sounds - I do this on my mobile phone (volume turned up slipped in my shirt pocket - saves messing earbuds, or whatever). The name of the series is: The Bear Next Door - you can find it here
An unusual feature of the episodes is the wide variety of speakers. Each one is a national of the country they represent.  See if you can spot what the five countries have in common: Lithuania, Finland, Moldova, Latvia and Estonia. Fascinating, absorbing and higly informative. Codger recommends!
Garden well and truly open!
Getting back to gardening for a moment. It has been a pleasure to have folks calling in for plants. Lots this past week and more booked in for the week ahead. So, what's available?
Perennials. I can't mention every one so I'll highlight a few. As I've said, the last few irises are waiting to be snapped up. Plus a few water iris, if you have a damp spot. Plenty of hydrangeas looking for a good home - various sizes and coming into flower. Aquilegias have proved popular - few left. Loads of rudbeckias and other cone flowers. And, soon to flower, some lovely delphiniums
Annuals. Plenty of petunias - really colourful types, and some cosmos, which are also bright and cheerful - and long-flowering. I'm sorry to say that I'm now out of sweet peas - potted and grown wigwam style. I'm sowing some more so there is a chance of the same later in the season. I still have some nice geraniums - both upright and trailing. And I've made a discovery: although grown as an annual, they can be over-wintered - see the photo!
Tomatoes a-plenty!
Codger broke a promise to himself and has ended up with no less that 14 varieties! I can't mention all of them but, as many visitors are happy for me to choose for them, a few pointers ...
If you are just beginning this malarky, go for a bush variety and ask for it to be potted up and ready to go. I still think Cerise is the best bet - loads of bright red, sweet fruits - prolific. So much so, it will probably need a few sticks to support the luxurious growth. I have plenty of alternatives such as the Polish Maskotka (more about Poland below) and some smaller varieties such such Tom Thumb and Tiny Tim (I kid you not). Nearly forgot - Garden Pearl looks very promising and a new introduction this year
Perhaps you prefer the traditional method of growing tomatoes - as a vine up a cane (or trained up a long string) - generally known as cordon. I'll mention just three varieties: new this year although an heirloom variety - Red Pear - said to be very sweet. Golden Sunrise - as the name suggests a yellow variety. And, for a beefsteak type - Marmande and, even, Super Marmande!
Fruit and veg
I must give strawberries another push. Nice potted plants - already in fruit! And, almost ready to plant out, squashes (including the colourful Turk's Turban), courgettes and cucumbers (several varieties). Beat inflation, cut the cost of living - Grow Your Own!
Finally, a bit of history
During the four weeks sice the previous blog (sorry it has been so long), the horrifying scenes of death and destruction in the country of Ukraine have been constantly in our minds. As I work on the soil, those thoughts often to into heartfelt prayers. (Helped, I must say, by a timely sermon at our church sparked by these words of Scripture: I urge the, first of all, that petitions, prayers, intercession and thanksgiving be made for all people (1 Timothy 2:1 - it's worth checking and reading on)
I'll tell you more in the next edition about the wonderful work being done by our Polish friends - great things are being done for those suffering frim the conflict. For now, I feel drawn to share with you a strange coincidence. Should you look back to the blog dated 18th April, you will see a refreence to my Polish uncle - a  soldier who married my father's youngest sister. I lost touch with him after my auntie died - he subsequently remarried. Wrongly, as it transpired, I thought he had died

Exactly a week after writing the piece I received a phone call from a cousin. My uncle had, in fact died - just about the time of writing. Uncle Nick had just edged into his ninety-ninth year. I had the privilege of attending his funeral which re-ignited questions in my mind about the epic of the Free Polish Army. How it was that well over 100,000 Polish servicemen made it to these shores. Bear in mind that in 1939 Poland was completely overrun by the Germans from the west and the Russians from the east - a result of the evil Molotov-Ribbentrop Pact by which the country was doubly subjugated

Both invading armies treated the Poles with terrible savagery. And there is relevance today when you learn that the Russians forcibly deported 1.7 Poles. Thousands died on their way to the labour camps in Siberia. You will remember that, having fooled Stalin, Hitler attacked Russia in 1941. Suddenly the Russians were our allies! So in 1942 with the urging of Churchill ten of thousands of deported Polish nationals were reluctantly released from captivity and allowed to travel south to, of all places, Iraq! And then to Persia (Iraq) where the British Army received the troops and their dependents and got the men into fighting order

Looked at from beginning to end - deportation to the gulags, the great trek to Persia, the fighting in Italy, the eventual arrival in Britain - we have a series of episode that involved great suffering on the part of ordinary people swept up in the tragedy of war. Whole families were forcibly extradited at the beginning - even whole villages. Many died before they got to the work camps - and, in the camps of course - not the mention the deprivations of the journey south upon release

I understand that when General Anders did his initial arithmetic he found that he could not account for 20,000 troops - where were they? The sickening answer: in 1940 Stalin had the entire Polish officer corps secretly massacred at Katyn, something denied by the Russians for years
Sadly, the British government did not act well in some regards. The Polish Army was not invited to march in the Victory Parade at the end of the war. Indeed, to add insult to injury, they were urged by the new peacetime authorities to return to Poland. The small minority that took this advice had cause to regret their decision, some being executed when they got back. My uncle, wisely, stayed here. I remember him asking, "What did I have to go back to?"

Excuse me writing at length but, surely it is true, history has lessons to teach us. As you think about the present events in Ukraine - and the help being given by Poland - will you understand why old Codger is so motivated to help

There will be more on that particualr topic next time - for now ...

Best wishes from Garden Codger (and a few photos to follow)