Seems impossible that it has come and gone so quickly. The Queen's Platinum Jubilee, that is. It must have been inattention on Codger's part but he was expecting a two-day job. There was much in the four days that was really enjoyable - we certainly had significant reasons to celebrate Her Majesty's record-breaking reign

What most most memorable? I can't help admitting that I enjoyed Paddington's audience with the Queen. For me, that look the well-poised biscuit - or, rather, the marmalade sandwich 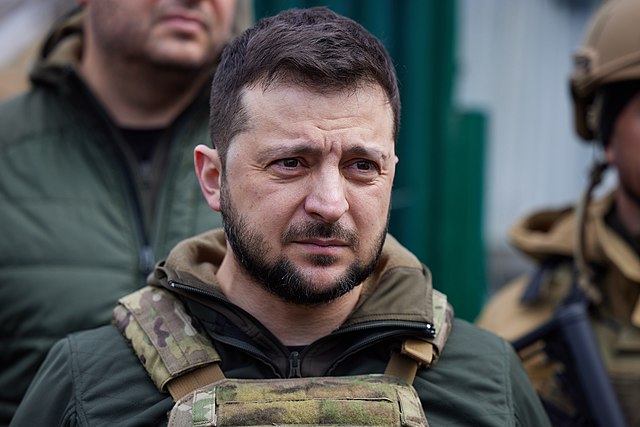 I even wondered if there was a hidden message in support of Ukraine - but perhaps that was pure coincidence. Did you know that the Ukrainian voice-over for the original Paddington film was done by none other than Volodymyr Zelensky? In somewaht happier times for him as an actor and TV personality - he can have hardly planned to be a wartime leader of an invaded nation

His appearance on the world stage has been truly remarkable. May he serve as well as our own Queen has done. And draw strength in the way that she does - see endpiece

Supporting Ukraine
Before we turn to gardening matters, a quick update on donations for our Polish friends who are very actively supporting Ukraine. You may remember that we wish to set up a giving channel that works in a similar way to the one we did for BCM. There were unexpected delays at the very busy Polish end and then we ran into our own national shutdown for the Jubilee. I'm very much hoping that I can write again next week annoucing that the giving page is well and truly open!In the meantime we wish to thank all those who have given during the last couple of months. I am currently sitting on £350 that has been received in small cash donations. More significantly, a number of friends have agreed to delay their donation and to do an online transfer as soon as the giving page goes live - this could mean that we will be touching our first one thousand. (These good friends will be testing the system for me, thank you!) Meanwhile: essential assistance
I hear frequently from Henry Krol who is leading the relief effort within his organisation - the one we are supporting. Since we last wrote four vanloads of essential supplies have gone out. That's 700kg each time and they are reaching the East where the need is greatest. Readers will be aware of the intensification of fighting in the Luhansk area 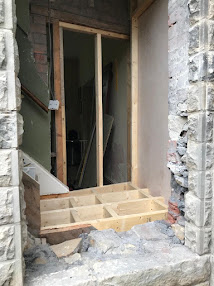 Henry says the key needs for the Ukrainians now staying in Poland is mainly housing and a job. So his team are running a scheme to help Polish hosts to extend and adapt their homes to provide accommodation. Six individual projects have been completed and nine more are under way. This support is really needed. (Something easily overlooked is that Poland has an historic housing need of its own dating back to the ravages of WW2 and the subsequent years of Soviet domination.)

In addition to meeting physical needs, much is being done on an emotional and spiritual level. A residential long weekend is being planned for lone mothers with teenage children. Obviously, the menfolk are back in Ukraine serving the country - usually in the military

Lockdown over - gardening continues!
Codger's own project started over two year's ago when folk had unexpected time on their hands and started to dabble in the garden. Well, many are back in the workplace but garden dabbling is still allowed. Here are some ideas where we may able able to help ...

Posh up the patio! We have pots of flowers that will go on flowering for months. Shown here (below right) are petunias - always a good bet 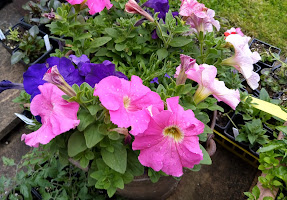 We also have marigolds, nasturtiums and zinnias. All will produce an instant lift with a buzz of colour. Sweet Pea wigwam: these have been hugely popular (is it the scent?) - out of stock at the moment but more on the way - I've had to do an extra sowing of sweet peas but they are doing well so you'll get late flowering

Tickle the taste buds! Yes, it's tomato time again. If you have children, or grandchildren, why not try Garden Pearl?

These come ready-potted-up and are about to produce fruit. I beleived the advert and it was correct - they are a very early variety. Small plants that pack a punch - lots of bright red cherry tomatoes. We have plenty of other varieties - just ask and I'll advise

Bang up a basket! hanging baskets are now coming on stream - in a range of sizes to suit most requirements. The basket shown here is small but packed with colourful calibrachoa. I tried these for the first time last year - a great addition, sometime known as million bells

Perk up the border! Doing some weeding this weekend? Rather than leave bare soil why not try a new plant? The list is endless - you are welcome to drop in and see what we have - from low-growing heuchera for the front to delphiniums at the back

Do remember that these are example - we have a very wide variety of plants that might find a place in your garden - or any space you have. Strictly speaking, we don't sell - but apprecaite any donation you care to make (no expenses taken, of course) Perhaps I was just a little flippant in my recollection of the Platinum Jubilee Celebrations - although I do think the Queen's readiness to exercise a little humour was a sign of true humility. (and carried off remarkably well)

I was freshly encouraged when, at church on Sunday, we were reminded of some of Her Majesty's sentiments expressed in various Christmas messages:

Although we are capable of great acts of kindness, history teaches us that we sometimes need saving from ourselves – from our recklessness or our greed. God sent into the world a unique person – neither a philosopher nor a general (important though they are) – but a Saviour, with the power to forgive. (2011)

This is the time of year when we remember that God sent his only son 'to serve, not to be served'. He restored love and service to the centre of our lives in the person of Jesus Christ. (2012)

He makes it clear that genuine human happiness and satisfaction lie more in giving than receiving; more in serving than in being served. (2008)

Back to the garden
There's plenty to do at this time of year so I'll draw a line there for today. I've just checked - half-a-dozen Garden Pearls left - so I want to pot them with a little supporting bamboo, ready to go. But hope to be with you again very soon ...

... best wishes from the Garden Codger

I've said little, if any, about the garden which is looking fairly good just now- a few photos to follow ... ...

Just get in touch!