Hope in in Difficult Times 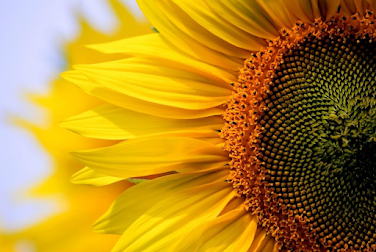 We live in a connected world. The big supermarkets are restricting the purcase of cooking oil - Tesco has just joined Waitrose and Morrisons. Had we previously realised that here in the UK most of our sunflower oil is produced in Ukraine?

Of even greater significance is the supply of grain to the world market. The impact on countries like the Lebanon - already in difficulties - will be immense

Yesterday's pronouncement by Russian General Rustam Minnekayev that their key war aim is to block of Ukraine from its southern ports is hugely concerning - but hardly a surprise to those following the war. Ukraine has a massive agricultural industry on which it depends for export income - this has already been severely disrupted

It is worth noting that 50% ofthe UN World Food Programme (WFP) comes from Ukraine and Russia so the predicted disruption and impact on famine relief is difficult to underestimate. You can read more about this here

A big thank you
I had not planned to write another blog post until later this week but the warm response to last week's post has caused to rethink
Please accept Codger's heartfelt thanks for the reception to our plans get funds out to Poland - where our friends are working ceaselessly. This support is two-pronged - it directed both to folk remaining in Ukraine and also those seeking shelter in Poland (this latter figure now stands at three million!)
What is being done?
As I type these notes our friends are preparing a 24 tonne shipment of relief supplies that will be driven out to warzone in the East of Ukraine where people are particularly desperate - you will have seen the situation on the news
Being on-the-spot they are very practical in their approach so they have just purchased a second-hand Renault Traffic that will be used by a church in Sumy to get food to the small and less accesible villages
Meanwhile, back in Poland volunteers are converting part of their church into a flat for a refugee family
Spiritual and emotional needs are also in the forefront of their thinking. Our friends constantly refer to the deep trauma they witness. They have taken delivery of the second batch of 50,000 'prayer books' designed with the needs of people with an Eastern Orthodox background in mind (they celebrate Easter this weekend, of course)
There are even new videos under production associated with a website, in Ukrainian, they has been set up in record time. In fact, the title for today's Codger blog is borrowed from that site: Hope in in Difficult Times or Надія у важкі часи
You can take a look for yourself - Google will kindly look after the translation. Incidentally, although Polish and Ukrainian are related lanuguages they are distinct - plus you have to cope with the Cyrillic script (similar to Russian - but with differences!). The website is here
Giving channel soon
So, I hope this gives readers a flavour of what is going on as our Polish friends reach out to their Ukrainian cousins. Quite a number of readers have asked about making donations. I can take cash at the moment but, within days, I'm hoping to announce the online channel. We did not plan on Covid and that has slowed us down a bit. In the meantime, a slightly amusing story ...
A trip to Wilko's
Do you remember the bit about potting compost at Homenase and then Asda. Well, Codger noticed that Wilko had gone one better - three 50 litre bags for £10! (see next). Whilst at our Great Bridge branch, a man approached me speaking in very broken English. He wanted to know about the drill bits he had located - were they the right ones? He turned out to be Pole - not that much younger than me, at a guess
Explaining "masonary drill bits" is a foreign language was an obvious challenge. I was able to communicate 'hammer drill' by gesture - although that might have been mistaken for "Gatling gun". I don't have many words of Polish but, strangely, remembered their word for "concrete" (betom) . We were home home and dry
As I was loading my six bags of Westland Gro-Sure All Purpose Compost I heard him tell the checkout lady "him Polish", he seemed rather pleased. So, as I struggled with the bags it crossed my mind that one old man might give another old man a helping hand. "This your car?", he asked - I made the necessary assurances. "You want another?" he continued and proceeded to try to sell me a second-hand car - unseen, of course 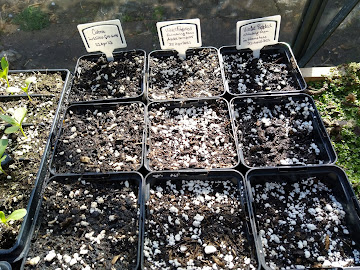 Finishing off the compost
But, I must finish off what I was saying about the potting compost - a bit of a thing of mine, I know. Since Codger is busy sowing seeds at the moment - an experiment. The photo show three rows of using different brands (from left to right): Wilko, Asda and Homebase - although only there are shown there are six pots of each
Regular readers will know that Codger usually adds Perlite - to improve drainage. When sowing seeds, as opposed to potting, he also sieves the material to take out the larger lumps
Asda and Homebase were similar in this regard but the Westland stuff contained a lot of lumps plus, what is best described as, fluff. It also smelled a bit - rather like liquorice to his old nose. We shall now observe germination and see how the three products compare
Looking forward
Well, there's glimmer of sunshine and more to do outside. I did a rough count this morning - I reckon we have over 300 plants in Codger's Nursery, all looking for a good home. Those I'd mention just now:
Flowers. Got some nice aquilegia - various types - just coming into flower and can be planted now. Also quite a few iris - lovely blue Jane Phillips - propagated from our own stock. I've also potted up, wigwam-style, sweetpeas - should give lots of flower and scent throughout the summer
Fruit & veg. Potted strawberries - they will fruit in their pots or you can plant them out - you'll get fruit in time for Wimbledon if you act now. Also, some lovely rhubarb - local variety that fruits really well - it's looking good. In addition, a few broad beans plants available - a Polish variety that I've found particularly good. There will be French beans in due course
And, there are loads of tomatoes - plants, that is - all at an early stage just now. I'll say more about the varieties available in future weeks. Something to suit all tastes, literally!
Must sign off now ...
... I was keen to pass on news from our Polish friends - I do hope you have been encouraged by the efforts they are making against a background of such heartbreaking events in Ukraine. I've just checked the news and find that, as Russian aggression in the East intensifies, Odessa has come under attack. O Lord, have mercy ...
Codger will be back in touch just as soon as the giving channel is lined up for business - hoping that will be within just a few days
... our prayers - Garden Codger
Just one photo on this occasion - remember the Orange Revolution? We live in hopes ... 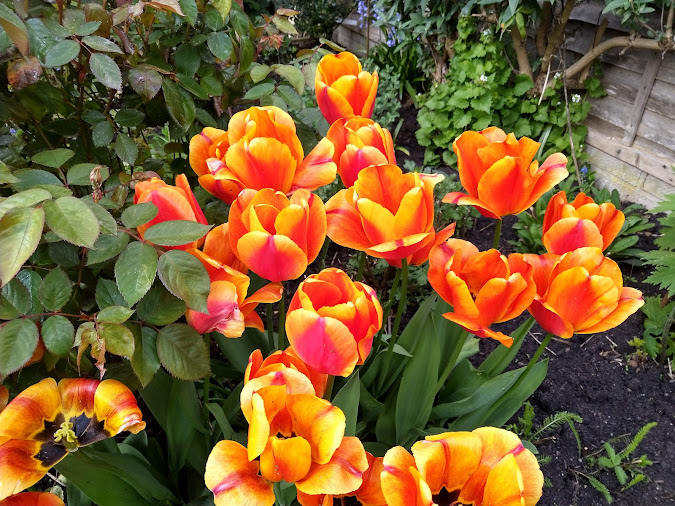