The ten days that have elapsed since my previous post have sadly borne out the lack of Covid consensus and underline the need to press on with normal living to the degree that is possible. Time on your hands is not a good thing when so many worrying factors press in. So, I hope Codger can help a little as we press on with getting on

First, a slight distraction. Do you recognise the flower in the photo? I am pleased to say that it has appeared in the shady corner I worked on earlier in the year. This is one of those plants that like dappled shade. I have put several different plants there that like those conditions and this is one of them. Look next week to see if you have managed to identify it correctly (cheating via Google or any other browser is allowed! A good little test of an image search, actually)

After finishing the previous blog (The long haul, 16 October), I had a further thought about the Spring bulb project: What about those readers not in a position to make up a planter? That can be difficult in a flat or any situation where it is hard to get outside. So, here is an offer: if you would like a Spring bulb planter – and live locally – just get in touch and let me know. I am in the process of making up six of these but could run to a few more if the demand is there. As you know, I do not charge but simply ask you to consider making a donation to the Birmingham City Mission (either by clicking here or direct to Codger)

Following on from last week, here is a bit more information that may be helpful. I sourced reasonably priced planter planters on Amazon that are excellent for the purpose. If you hunt around, you can find a 40cm Venetian window box for a fiver. That is a good size because it will not be too heavy when filled

There is a little drawback with these things. Most come without holes – you have to drill these yourself. A little reminder: bulbs like a free-draining mix so it is best not to use potting compost straight from the bag. This other photo shows what you are aiming for – potting compost plus vermiculite plus grit. If you can add a little leaf mould and blood, fish and bone then so much the better

Our second project was growing winter lettuce. You can see how mine are doing in this shot. Both varieties have germinated and will soon be ready for pricking out. But I fear I may have led you up the garden path. Watching one of Charles Dowding’s recent videos I now think we have started too late on this job. You see, it is not just a matter of temperature but, also, daylength. The Lollo Rosso lettuces that are doing well were sown about two months ago and are therefore well established. Obviously, newly sown lettuce will be in different situation. I shall persevere but with an extra twist. Let me explain …

Despite appearances the photograph is not of stage lighting but an attempt to build a contraption to grow plants during the dark winter months using grow lights. I had read that the cost of grow lamps had come down now that LEDs could be used

So, two or three years ago, Codger bought four cheap LED grow lamps on Amazon. Being cheap, they came on a slow boat from China, so we were really in the cold and the dark when they arrived. However, using a timer, I successfully germinated some seeds in the garage but then disappointment as one by one, three of the four lamps popped. I now realise that these cheap lamps are also a bit of a fire hazard so I can hardly recommend them here

However, there is an alternative type that appears to be safer, so I am about to have another shot at this. Watch this space (or listen for the bang!)

As you probably know, Gardeners’ World is compulsory viewing for Codger. He does have a problem, though. When it is broadcast in the nine o’clock slot there is a tendency to drift off just Monty comes to the jobs-to-do section as the programme draws to a close. I came round the other week to find him encouraging me to scarify the lawn. Or, perhaps, that was urged upon us earlier in the programme

Anyway, spotting a gap in the weather a week ago I found out the rake (the one with spung tines) and scratched away at the front lawn. To be honest, this is a job I do not enjoy but, despite, the hard work I stuck at it collecting a considerable pile of moss in the process. In theory, this should be great stuff to put on the compost heap but in my experience, moss refuses to rot down. I reckon it must contain some sort of natural preservative. I have also tried using it as a mulch but This time it went in the council green bin

Returning to the lawn, I was horrified to see just how bare some of the patches were now the moss had been removed. Maintenance turned into repair …

This may be of some help to readers, so let me tell you about the repair job. I am no great lover of lawns, but a mangy lawn is an insult to any Englishman who claims to be a gardener. So, honour drove me to spend ten pounds, or thereabouts. The big DIY stores sell a strange substance labelled Top Soil. How this is defined, I know not. However, they claim it is weed-free and the 20 litre bags were on special offer – cost £10. Grass seed is more straightforward, and I managed to get a box for £3.99

If you do this job yourself, I strongly recommend sieving the topsoil (so called). Sprinkle liberally where the making-good needs to happen and thinly sow the grass seed. Cover with a sprinkling of the sieved topsoil. I managed to time my operation just ahead of the rain. At this time of year you should see signs of life in about a week

I seed I used was packaged by Westland. The box usefully points out that you need a soil temperature of seven degrees or more. I have found that that is easier to achieve in the autumn than in the Spring. Remember the oft repeated autumn maxim, “sow while the soil is still warm”

I got caught out in the Spring three years ago and phoned the Westland helpline. They honestly told that they had recieved lots of complaints. The problem was put it down to the cold weather; perhaps that is why they now state the germination temperature on the box

I spent £13.99 in total but with half the seed, and one of the four bags of topsoil, left over I reckon it cost me a mere tenner. I should also add the exertion do knock me about a bit and caused me to ask …

Am I a seven stone weakling?

Remember my tip about grit in previous issues? Buy chicken grit rather than pay through the nose for horticultural grit. However, I also mentioned the weight of the bags, 25kg. I now resort to the barrow and this got me thinking about the days when I could handle a one hundredweight bag of cement. So, the question arose in my mind: is the old hundredweight the same as 25kg?

To my surprise the answer is a very big - No! The modern 25kg bag is only half a hundredweight. When I was doing A levels I got a holiday job on a building site. I found it to be an excellent finishing school, teaching a finesse that will be obvious to any sensitive observer. One of my jobs was unloading the cement lorry which brought the material straight from the manufacturing plant – usually the bags were still hot from the ovens. The knack to carrying them was to stand back to the wagon and let the bag flop on top the shoulders and then trot to the cement store. Stopping was fatal. Dropping a bag would cause it to burst open – what you might call a whitening experience. Looking back, I wonder just how many tons I managed to move at 50kg a time

Older readers will remember learning their weights and measures. Fun was it not? One hundredweight equals 112 pounds – written, of course, as 1 cwt = 112lb. But why 112 and not 100? Well, I’m not 100% sure about this (or even 112% sure) but I think it relates to our old friend, the stone which originally weighed in rather less than the modern 14lb, 12½ lb, in fact. There are eight stones in a hundredweight – you can work it out. One effect of this was to create the long ton and the short ton – the latter being used in the States where 20 x 100lb = 2000lb – the short ton. The Imperial ton being 2,240lb – eminently sensible, of course! But I am rabbiting on ...

Where does the seven stone weakling come in to all this? For the sake of younger readers, let me explain. When Codger was but a callow youth, there was a ubiquitous advertisement aimed at young men who feared being thought of as puny. They were urged to sign up and to develop a magnificent physique. I cannot now remember the cost of the Charles Atlas course, but I did cement bag training instead - courtesy of Bert King & Son, Builders, St Albans
Incidentally, you can see a fascinating period interview with Charles Atlas (born Angelo Siciliano) here. I found it very interesting to hear his comments about the beneficial benefits of wartime rationing in England (by which he meant the UK, I suppose) 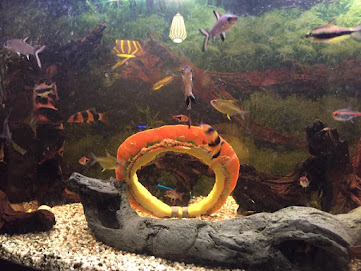 … a curious photograph. Now here is another fishy tale. Can you work out what is happening in this photograph sent in by expert aquarium-keeper, Brian Turner?

Remember the squash I grow every year called Turk’s Turban? It turns out to be a delicacy beloved of tropical fish. Here they are, enjoying the hat band!

… with best wishes from the old Garden Codger

Note: next publication date is Friday 6th November - or, perhaps, a bit before if we can

Oh! And here is the advert that appeared in the comics I read in my youth. (I'm afraid to say that I was a great devourer of comics. I was once moved on by a policeman for reading on the pavement after picking up the Beano from the newsagent)