Well, we did come – that was last Sunday. And we were thankful

There we were in our masks and properly socially distanced. The hardest thing was not singing. Perhaps a rewrite is called for: Come ye thankful people come, hum the song of harvest home

As difficult as not singing was not fraternising. I could not help thinking about the injunction: addressing one another in psalms and hymns and spiritual songs, singing and making melody to the Lord with your heart. True worship has both a horizontal and a vertical dimension

However, we had a great focus: Psalm 104. A perfect choice for harvest. If you would like to drop in and see how it went just click here – you will find much to interest. It is set out so you can pick and mix, so please feel free. I think you will be struck by the note of genuine thankfulness 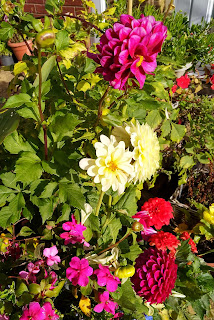 And speaking of thankfulness it good to see that, although now leaving the growing season, we are still getting donations for BCM. If you are new to this blog, let me explain. For reasons of accountability I use give.net – you can see it here. Users are required to set a target, so I made an initial guess at £500. However, we cleared that in the first few weeks of lockdown. After a second shot, I eventually decided on £1500 as that would have probably been the sum raised by the Webb’s annual charity plant sale had it gone ahead 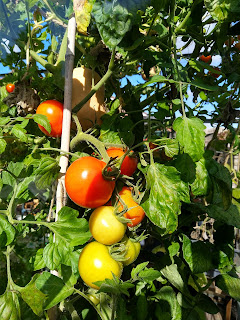 Well, the figure has been exceeded and it looks as though we might well make £2000. (Reminder: I must find a way of resetting this target for next season.) Yes, old Codger has decided to have another shot next Spring, but we are very much hoping that the charity plant sale will also take place in the summer of 2021. We certainly do not wish to detract from that well-established event. But who dares look that far ahead at the moment? 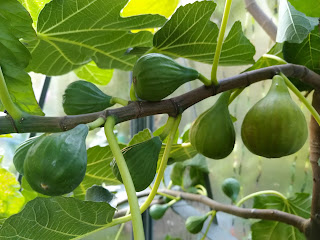 Well, we do have to look ahead. That is one of the great positives about gardening. So, I am hoping for a chance to get out later today so I can start sowing. In the greenhouse, we are approaching the changeover period when the tomatoes come to an end and they will be space to grow other crops through the winter. At a minimum, I need to start some lettuce off that can be planted in the main bed

Our main attention this time of year has been, of course, on reaping. The outdoor tomatoes have been prolific but are now completely finished. Day by day I am picking a pear or two. These go into store in the garage and are then brought out to ripen and eat. There is one other fruit tree still producing – fig! I love them. This is their first main season – remember that I have only had a proper greenhouse for a couple of years 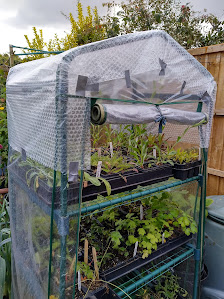 The little plastic greenhouse now holds over half of next year’s nursery flower stock. These contraptions are remarkably cheap but, as previously observed, the covering deteriorates quite quickly – hence the bubble-wrap repair as shown in this photo

It is hardly a greenhouse - I use it as a cold frame. But, even so, I can get caught out with plants suffering in strong sun

No doubt regular readers are expecting a pond report. If you were with us last week you may remember that rain had stopped play as I was trying to get the pond to rights following a muddy water episode. Several planting baskets had got overturned and their contents emptied onto the pond floor. The pond pump and the pond filter were in jeopardy and therefore the health of the fish

I am glad to say that the pump kept going – most probably because I repeatedly cleaned the filter. The model I have permits this to done by turning a handle. In demonstration videos you usually a nicely presented model delicately turning handle. What you don’t see is the dirty water being jettisoned. What a waste! In fact, a double waste. I divert that water into an old dustbin. The dirt (mainly fish poo) quickly settles to the bottom. I draw off the clean water and return it to the pond. The residue goes either on the garden or is added to the compost heap. Fertiliser for nothing!

Strangely, you may think, there is a connection here with Psalm 104. One message of that poem/song/prayer is that we see the Creator’s greatness in the very sustainability of his creation. It has been designed in a dynamic way so that it continues to function – and we are the beneficiaries. It was, in part, this realisation that drew me into gardening – so, surprise, my first project was a compost heap!

I was sparked by something I had read by W.E. Shewell-Cooper – now, I fear, a forgotten pioneer and not adequately recognised, in my view. This was in the days when horticulture and agriculture seemed dominated by Imperial Chemical Industries. I feel an episode coming on so, perhaps, I’ll tell you more about Shewell-Cooper another day. (For older readers, he would put you in mind of a military version of Barry Bucknell, the unlikely Do-It-Yourself-er of the 1960s. Imagine a rather grainy 405-line black & white.)

Pond filters need maintenance. The filter performs a dual role both mechanically removing particles but also biologically purifying the water through bacterial action. This process depends upon a filter medium in which a colony of bacteria is built up – see the photos. It is, in fact, the same process that you benefit from and why it is good to pay your water rates

You may wonder if there is a more natural process that can be employed. The answer is Yes – a reed bed. Prince Charles has one at Highgrove but I, sadly, lack his princely space and resources

As I have commented previously, pond keeping can be a pastime that easily takes over one’s life. A simple wildlife pond where no filter or pump is involved is a far easier option. However, once you have fish the whole operation becomes more complicated

An extra complication, in my case, is that I try to protect the fish from the predations of our local herons by providing hiding places. Thus, I have inverted a couple of old bread crates that support the water lily baskets and give the fish a fighting chance by allowing them to hide underneath

When it all works (!) I have lovely water lilies, healthy fish and reasonably content herons who are allowed to take a few of the smaller specimens

But there is a limit – hence the (nearly) invisible line I told you about last week. It seems to be working so I have extended it to another side of the pond

During my recent aquatic exertions I made a discovery. I have previously observed how the young koi start off a uniform black and then, later, develop colour. What I had not previously noticed is that the colour change starts below on their belly and works it way to the top

Thus, during their teenage years, so to speak, they still appear black when viewed from above. Excellent camouflage. I now know why the heron scratches his head when peering down into the pond. Clever bit of design, I reckon

As the evenings draw in, Mrs Codger has restarted decluttering operations. Among the excellent items we are moving on is a library of Royal Horticultural Society magazines. The Garden is the official monthly journal of the Society. As such it must surely be regarded as the most prestigious of all gardening magazines. I would characterise it as being authoritative yet not stuffy. Great coffee table material to flick through – lots of great photographs. I have sets covering whole years in the 1990s and also the early years of the present millennium

I am afraid this has to be the last call. Any takers? Otherwise I shall reluctantly book my slot at the local tip

Well, folks – please excuse me if I draw to a close whilst there is still a chance to get outside. Thanks for reading …

.. best wishes from the Garden Codger