Today's opening shot shows pots on our patio at home. However, this blog comes to you from a cold and rather less colourful Buxton. A pity since it can be lovely, here

It's a brief visit following a week or more of downtime. Nothing to do with pandemic and even ping-demic, rather some other nefarious bug that has doing the rounds and chose to lay old Codger low. However, the break in our usual routine presents something of an opportunity. So, unashamed, we wish to promote a charity venture that deserves support wider than that of the families immediately involved

Despite the miserable weather here yesterday, the sun shone on Ullswater where our older granddaughter had travelled north to taking part in a training exercise. She is a keen member of a relay team planning to swim the English Channel in just a few weeks time. A big challenge for a fifteen year-old
The intense training programme has lasted a whole year. Obviously, endurance is the main focus but many other aspects have needed attention as well. The practice in Ullswater was designed to provide experience of getting in and out of a boat in the dark, somewhat essential for relay swimmers at night! We have discovered that relay swimming is wonderfully well organised - and extremely demanding. On top the obvious endurance training and associated fitness regime are all sorts of other considerations - like dealing with jelly fish as well as the severe thermal challenges - the video below was taken in February!

I think a grandfather can be forgiven for a touch of pride and using this blog to promote the charity aspect - all donations are going to Mencap, the mental health charity. You can find out more in this video ...

And, should you feel inclined to donate, then simply click here!
[Since writing these lines about the Ullswater trip, Katie Ann did has done a night swim at Salford Quays and is off to Colwyn Bay today - these kids show real commitment - three training trips in three days!]

Back to gardening! Before leaving home, I was pondering the gaps in our flower border. Such gaps appear as the high summer flowering period comes to an end. This this year seems more gappy than usual. You may be in the same situation so here are some suggestions of ways we might help:

1) Drop in a dahlia. Dahlias are cheery plants and so versatile. Codger's nursery has a fair selection that are potted up and ready to go. You have the choice of planting out (easily done) or simply dropping the pot in place (very easily done)

You'll have almost instant flower and, provided you remember to deadhead, a succession of blooms until the frosts come in the autumn2) Plonk a pot of instant colour. We have petunias already potted up ready for you to take away. Instant colour! Also very colourful French marigolds and zinnias, which are always good value

3) Impress with geraniums. We have some really good quality geraniums planted up in both large pots and troughs. These can look particularly good at the front of the border

4) Or, distract with a hanging basket. Only a few left so you'll need to be quick with this one

5) Alternatively, start next year early! You may have already decided on improvements you want to make. Planting perennials now means that they will establish strong root systems giving you a better display next year. Why not have a look at what we have got? We shall be back home in the next 24 hours so please feel free to book a visit

In fact, this present period of late summer, is a good time to plan border improvements. I recently stumbled upon an excellent video that is full of really helpful design tips from a professional gardener. He sets out beautifully clear design principles that even old Codger could follow

The video takes the form of an interview between the Middle-Sized Garden lady (Alexandra - sorry, surname escapes me) and the head gardener, Tom Brown, at West Dean Gardens in Sussex. Very thoroughly recommended! [late edit: I've just noticed that a mis-read is possible - it is the garden that is Middle-Sized not the lady!]

The same lady has also given space to a Danish gardener, Claus Dalby. Perhaps readers will be thinking I should get out more but I shall risk recommending three videos in one blog (if we include the Mencap video). Mr Dalby grows his magnificent dahlias in pots and they look great. He is also very helpful in suggesting effective companion planting. Take a look and I think you will be impressed

From the sublime to the ridiculous? Here's the third tip in my short series on composting: give the heap an occasional treat! By which I mean, add stable manure. I'm told that there are more horses living in urban areas these days than in the countryside - surprised? So, there's some manure near you! Hunt around and you are likely to find a supply - look for a pile of black bags by the gate

My source dried up when a large stables changed hands. However, a keen reader has found an alternative - right under the M5/M6 link. So, the next time you drive north onto the M6 from the M5, look out and look down - I could be below grabbing a few bags 100 feet below the carriageway!

Now a word of warning. When you open the bag don't be surprised if you get little more than wood shavings. Remember, the you are getting the result of 'mucking out'. So, it's best to get two or three bags and blend the result

Think of yourself rather like those people whose job it is to blend tea or coffee. Experience will educate you!

The experiment I forgot

Very much earlier in the year I mentioned an experiment in growing potatoes - Pink Fir Apple, in fact

I was interested to see if the type of container made any difference. So, I planted three of these salad potatoes in a large plastic pot

And then I put three, of a similar size, in a felt growing bag (seen the photo below). I was careful to use the same compost mix to cover both sets

From time to time, I added more compost - just a mixture of whatever came to hand. I'm afraid that being in a corner of the garden by the compost heap they were rather neglected - and left rather too long

Just the other day I noticed the tops dying back and thought I ought to take a look. The photo (above) shows the result. Those on the left were grown in the plastic pot. The better yield, on the right, were the potatoes grown in the felt growing bag

I know very little about these bags but I suspect that they are sometimes used by local cannabis growers. I reclaimed my bag from a local walkway where the results of such a growing enterprise had been dumped. That's Codger recycling again - and to good effect in this particular case 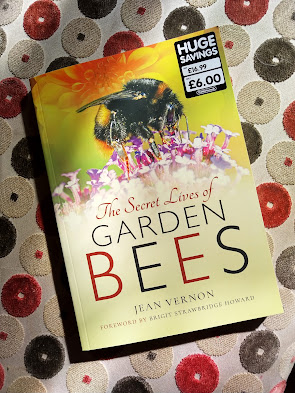 Telling a bee from a fly

About the same time in February, I published a photo of what I thought was a bee. Regular reader, Rachel White, helpfully corrected me - the photo showed a bee-like fly

I was pleased to be put right and am now in a position to better inform myself. The book shown was purchased at a branch of The Works (in Buxton, actually, just this week). I mention it in case anyone else would like to get a copy - as you can see, it costs £6 at the discounted price. The book is by Jean Vernon. It is an easy and fascinating read - it also has some excellent photographs

Did you know that in the UK there are:
- 276 species of bee
- 7,700 species of wasp
- 7,000 species of fly (including 280 hoverfly
And how you you tell the difference between a bee and a fly? Well, among the differences look at the eyes and the wings. Bees have eyes at the side of the head rather than the front - and - they have four wings rather than two
Pots and potting
Thanks to those good folk who have given me pots - Codger is grateful although he never seems to have enough of certain sizes
Be that as it may, I've recently discovered a useful fact about square pots having experimented a bit with different sizes
You may have bought a small plant in a 9cm square pot - it seems pretty standard in the trade. The next size up is 11cm - sometimes known as a one litre pot - for obvious reasons. Now here is the useful bit. When potting on from 9cm to 11cm, turn the plant 45 degrees. You then have four easy-to-fill triangles at the corners. Try it and you'll see what I mean
Well, that's all for today folks. We have travelled far and wide. But don't forget the Mencap appeal - it's a good cause and certainly worth encouraging the youngsters undertaking the challenge of the Channel swim - here's the link again ... ... HERE!
... best wishes from the Garden Codger
Plus a few photos ....