Gardening mistakes and some offers

It has been said: There are no gardening mistakes, only experiments. The epithet contains more than a grain of truth. But rather like love, the saying covers a multitude of sins. Scorching hot weather, such as we have experienced this past week, will certainly show up a few deficiencies but we can also get some pleasant surprises

The flower in our first photo shows my Ligularia. It can hardly be a rare plant but I do not know anyone else who grows one. Mine is now 30 years old, perhaps a little more. Although it regularly puts on a great show, for the first few years it languished and was on life-support more than once - revived by a good soaking . This gave me a clue as to possible remedial action

Later, when I created a bog garden next to the pond, I decided to relocate the ligularia there. Then, when winter came, I thought I had lost it. However, in the following Spring, the plant took on new lease of life with a display of large leaves. From these emerged long flower spikes with bursts of bright yellow flowers. Since then, without fail, it has got bigger and brighter, year on year. The flowering stalks are now two metres in length - they make that growth afresh every summer. It is one of those plants where you see the increase every day

So, a failure was turned into success. Mind you you, we tend the remember those - the successes, that is - more than failures. So, let me even the score
[Perhaps, first, I should just say a word about the author of the saying quoted at the beginning. Universally, the attribution is to Janet Kilburn Phillips. However, I can discover nothing about the lady - she remains a mystery - can any reader enlighten us?]

Our Monty (Don, of course) advises the fairly close spacing of tomato plants. So, I have given this a try (look back a few issues to get the story). Result: the greenhouse has turned into a green jungle. But I should not blame the expert ...

As part of the experiment, I planted three rows. Having a few Cerise spare (my favoured bush tomato), I put them at the front. Well, the position was right - it is fairly easy to hack them back every time I squeeze into the greenhouse. But the location was wrong - they do far better outside

Cerise is a bit wild in its habits but, as many readers have found, it will crop prolifically outdoors. I won't be growing it in the greenhouse again - too much leaf, too little fruit. That apart, I'll see how the cordon tomatoes do and report back - several different varieties being tried. Sungold is currently leading the way

[Perhaps I should add a rider here - particularly having mentioned mistakes - I am not 100% confident about my labelling. I shall own up to errors! More on this next week]]

Continuing the experimental theme, Codger has two no-dig trials going on. One is just around the corner from our own garden whilst the other is in Birmingham. I'll focus on the Birmingham plot this week and the local one next week, mattock and all

You may remember that I set out the first no-dig step as buying a bike. That was a joke, of course - I might have well told those interested to buy a large-screen TV. The point being: for classic no-dig you need a large piece of cardboard. This is simply placed on the lawn where you want the growing bed to be - assuming that you wish to sacrifice part of the lawn for a veg plot

If you look up 'no-dig' on the web, you'll soon get the picture. The cardboard is to suppress the grass and weeds by excluding light. But what next? The head honcho of this method, Charles Dowding, has moved away from hard edging in more recent videos (he believes they harbour slugs, I think)

However, for what I thought to be good reason, I decided to construct a frame from decking. Why? Well, I was worried that the torrential downpours that we had a couple of weeks ago would wash the growing medium washed away. It is far too precious to waste!

This raises a key point: what material to use as the growing medium? Well, I happened to have a good supply of wonderfully well-rotted manure stored away. This, I supplemented with a few bags of bought multipurpose compost plus a bag or two of my own homebrew

At this stage of the story I should point out a salient fact: no-dig is NOT no-work! In all I used 20 bags of material - these were carried from the back of my garden to the car (60 paces) - and, after transportation, from the car to the bottom of the receiving garden (another 80 paces)

Hence the distance covered can be calculated as: 20 x (60 + 80) = 2,800 paces. Observers wondered if I was training to compete in the Special Forces Physical Fitness Entrance Test. So, with no-dig, you don't have the work of digging, but you certainly have the work of carting heavy material to the site

Once in place, the contents of the 20 bags were spread to fill the frame and then trodden down. Now, one marked bonus of no-dig is that you can plant straight away - we did and the result is already looking good - as you can see in this photo
So, what's Codgers take on no-dig? Well, he is keeping his counsel until next week when he will furnish more details and compare the two trials. The Tipton trial allowed for an extra tweak - watch out for that mattock!Hot composting (1)

As we pass on, just a quick word about my favourite gardening activity - composting(!)

I still find readers get frustrated by cold, dank piles that don't seem to do the business. So, over the next few weeks I'll be giving a few tips. My first is very simple: chop small. I use an old pair of shears. As I add the material I chop away with a slight mixing action. I know from experience how small to chop. Think of grass mowings - you need to aim roughly for that size

To prove my point look at the photo of the thermometer. The heap had gone cold, (about 20 degrees) to 70 degrees in 24 hours. Chopping small makes a definite difference - but it is, of course, far from being the only factor. To learn more, read again next week

Yes, old Codger has been doing a few things other than carrying heavy bags, constructing frames and chopping up weeds and kitchen waste. So, here is the four-fold lowdown:

(1) Hanging baskets. Some time ago, I mentioned that I was investigating different types of basket. I have yet to find one that does not need watering (!) - especially with the weather we have had this week. Be that as it may, I now have three or four baskets available on a first-come, first-served basis. They are variously planted up with geraniums and petunias - and looking good. The photo below will give you a feel (see also the tailpiece). As usual donations go via Codger go to BCM

(2) Colourful containers. These are ready planted up and would look great on the patio. Several available - both pots and troughs. Mainly geraniums but also zinnias, French marigolds and petunias. See photo above

(3) Soft fruit. Once again a fair range is available: raspberries, strawberries, redcurrant, blackcurrant, rhubarb, blueberry and chuckleberry. Roll up, the choice is yours

(4) Border plants. Need to fill some gaps? Replacing slug damage? Come and see what we have got - a wide range of perennials are available - coneflowers, daises, stocks and so forth - too many to list

As I have explained elsewhere, because of health problems at home, I have less time than formerly so I am no longer able to produce long lists of plants which have to be constantly updated. But there's an easy solution: come and see! The photo below is a view of one part of the border to give you a feel for the range of perennials we have available

An experiment that worked

Readers will be aware that Codger is an inveterate recycler (the making of compost being the supreme form of recycling!). That apart, and being a war baby, nothing wittingly gets thrown away - and that includes plastic milk cartoons. We usually buy the 4 pint size. A quick rinse out and they are filled with clean water - destined to be stored in the greenhouse as you can see in this photo

During the day they absorb heat - remember the temperature in a greenhouse can rise suddenly and rapidly. During the cooler night they give back some of that heat thus, to an extent, the thermal mass evens out the day/night temperature of the greenhouse

A further advantage is an immediate on-hand supply for emergency watering. A plant in containers can dry out in an hour so I've always got water available if I spot a plant in difficulty

Watching Monty on BBC 2 last night, I was reminded that it was time to have a poke around. You can see here was surfaced - a full trug of good quality potatoes - the sort that don't have much of a skin

Believe me, I don't plant these - they just appear! My assumption is that I must, by accident, leave the odd tiny tuber which springs to life the following season. You can see in this photo that they were growing very close to the beans. Whether that reduces the quantity, I know not. The really surprising fact is the large yield: 6kg! That equates to 14 pounds or one stone, in old money. And the growing area is less than half a square metre

Where did they come from in the first place? One possibility is an early foray into potato growing. I had read that they were good for breaking up clay soil. I certainly found this to be the case and would recommend the practice to anyone. But this trial predated my raised beds. Could the seed tubers have survived all that upheaval? Perhaps, I should add that the original heavy clay has benefitted greatly over the years from the annual mulch of homebrew compost (more tips next week!)

Well, I think we are almost out of time. I have not done as I said and identified the flowers in last week's tailpiece - but that can wait, I'm sure. In fact, I shall give you a few more to ponder - plus proof of the weight of the buckshee potatoes

Please consider the four offers. The plants are here and waiting. Why not call in and take a look? We had three young visitors this afternoon. A convenient number as the first figs were ready for picking - precisely three of them

Older visitors get the choice of tea or coffee - drinks that is, not plants! Thanks to those who have recently donated - I would love to creep a bit closer to that target. You can check the progress by clicking here

... with best wishes from your old friend, the Garden Codger

PS: This week's extras. First, the only flower I grow that might be considered exotic. Know what it is? Clue: think water, think Japanese 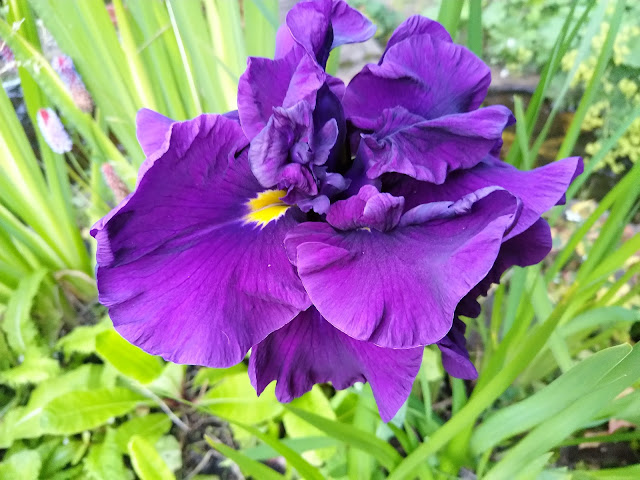 Do you know what this flower is? 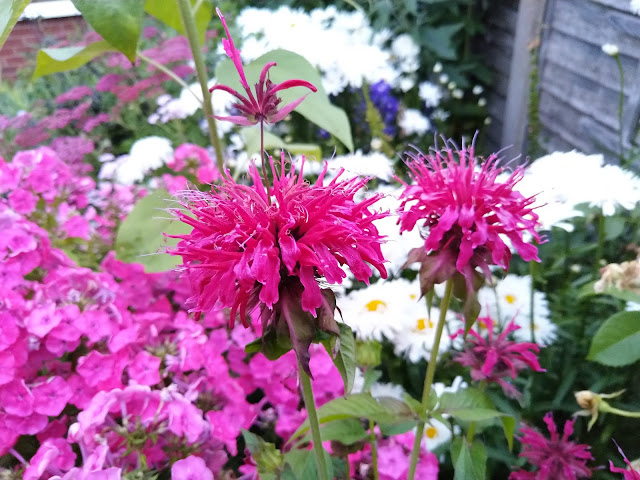 Here are the hanging baskets, about halfway to full bloom. You have a choice 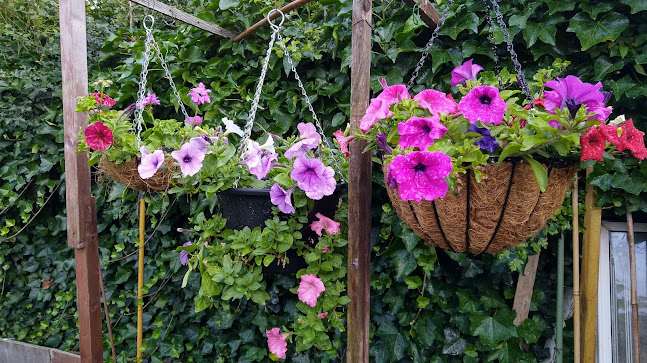 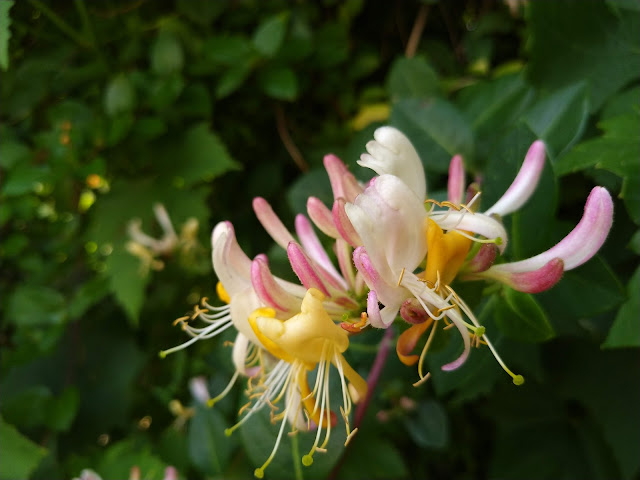 And, finally, proof of that potato yield! 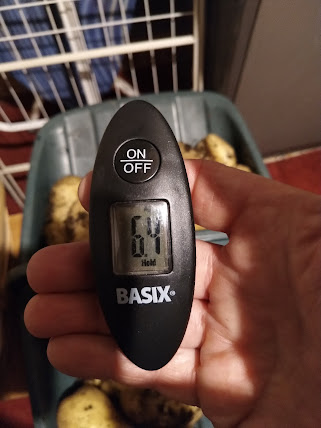