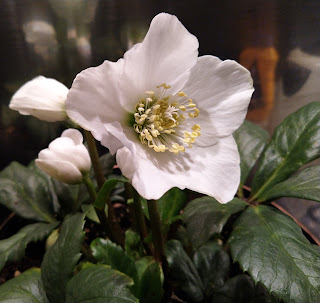 What a great name for a hellebore: Advent Star! Often called the Christmas Rose this particular variety of hellebore flowers a little earlier that others. In the run-up to Christmas - the season of Advent, in fact. I am hoping it will prompt me to focus on the reason for the season

Advent Star is a fairly new variety - new to me, at least. It has a profusion of white flowers and a neat, compact form. It is also distinguished by an upright habit so the blooms can be seen to the best effect - a star, indeed 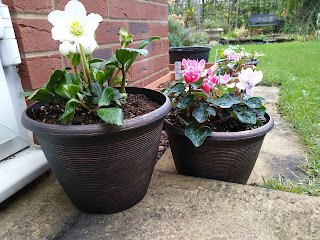 Provided it can be given a cool place, it will be fine indoors for the next month or so. Hellebores love a bit of shade so choose such a spot when planting out when it goes outside. Being a perennial it will come again year by year giving you flowers when there are not many about. A great addition to any garden

Oh! I'm speaking as if you might want one. Well, I have planted a few up. rather nice round pots with a rather subtle gold effect. These replace the Venetian containers (see next) that we featured a couple of weeks ago. We have a number available on a first come, first served basis. As we previously announced, all donations will go into the BCM Toylink fund. That will remain the case until the end of the current lockdown 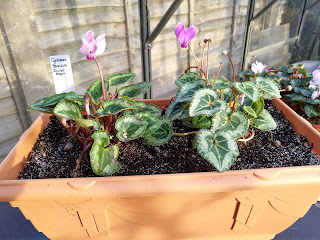 Those rather nice Venetian planters are no longer obtainable from the suppliers - time of year, I suspect. We have two or three left ready planted up with Spring bulbs - look back to the last couple of blog posts for details. Having scoured the market, we have been able to source some really attractive round planters as alternatives. These are planted up with tulips, Spring bulbs, or a mixture of both. We also have a couple with pink, while and red cyclamen 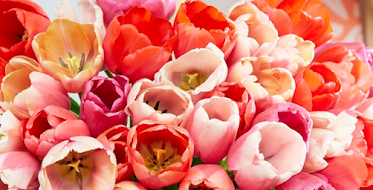 If you would like any of these, please contact me soon as we are likely to run out soon. As they say in the adverts; "When they've gone, they've gone!" I hope to update the Plants for You page over the weekend (but I am rather battling the clock at the moment) - this will mean you can see what is still available - with photos 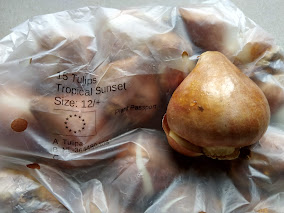 Just thought: I have not said which tulips are available in the planters. There are two varieties: van Eijk (a short red, shading to pink) and Tropical Sunset - shown here on the right. Lovely shades, don't you think?

We use good quality bulbs and plant them in a special mix of our own, so you will get really good results. The bulbs are top quality Dutch which has set me thinking about Holland again - I feel another story coming on. But first, a little garden tour ...

It is changeover time in the greenhouse. Although some of the tomato plants were still fruiting, I had to harden my heart and dismantle the last few. Allowing a the remaining green fruits turning red, I reckon we shan't need to buy any tomatoes until December

I tried a little experiment. Rather than grow the traditional single vine, with one plant I allowed it to develop three - as you can see in the photo. I wish now that I had weighed the fruit (too busy for that) - all three stems produced masses. The variety was Sungold. With the growing bed clear I have had space to do the planters as mentioned above. Next? Drop in next week and I'll tell you 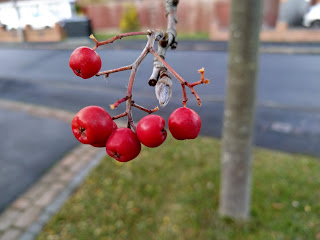 At the front of the house we have a Mountain Ash which, this autumn, carried a huge crop of berries. Now, however, it has been stripped bare - blackbirds, of course. Meanwhile in the back garden, fewer birds have been coming to the feeders. I have a theory about this. The birds, especially tits and sparrows, dart between the cherry tree and the feeders - the trees and shrubs providing cover. Come the autumn, the leaves fall and it takes the birds a while to get accustomed to the lack of cover. Has anyone else noticed this, I wonder? 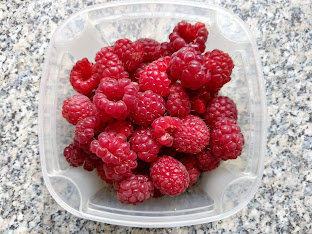 To my surprise, we are still getting a few raspberries - probably Autumn bliss - the labels disappeared long ago, I'm afraid

And just to prove that I kid you not, here (below) are the tomatoes we are eating at the moment. A mixture of varieties. You may remember that the big challenge under Lockdown 1.0 was obtaining seed 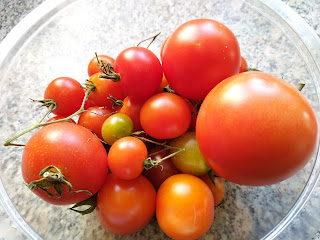 Friends and neighbours (literally) rallied round to keep me going with seed. The greenhouse was full to overflowing with seedling - some of which may have ended up in your garden

The old favourite, Moneymaker, did well. Also the standard cheap Lidl variety named Harzfeurer - I can recommend these as a standard. Overall, the best bite-size cerry type was Sungold - certianly on the list for next season 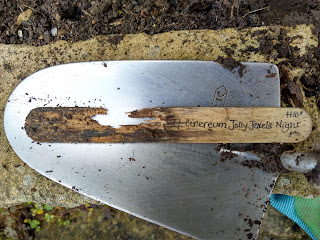 Earlier this year I said a bit about reducing the use of plastics in the garden. I think I said that I would report back on my trial using labels made of wood. Well, the picture tells the story - they rot. You can tell just by looking which end has been in the soil. Back to plastic, I'm afraid! 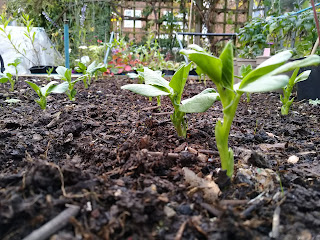 Despite the warning of a cold day yesterday, I found it a lovely day. Ideal for getting the planters done. The photo here shows the broad beans coming through and doing well. I sowed these exactly a month ago in October. It was just at that time I carried out operations on the front. The grass seed has germinated fine. But so have the weeds - I dare not show you a photo - too disheartening (dratted lawns!) 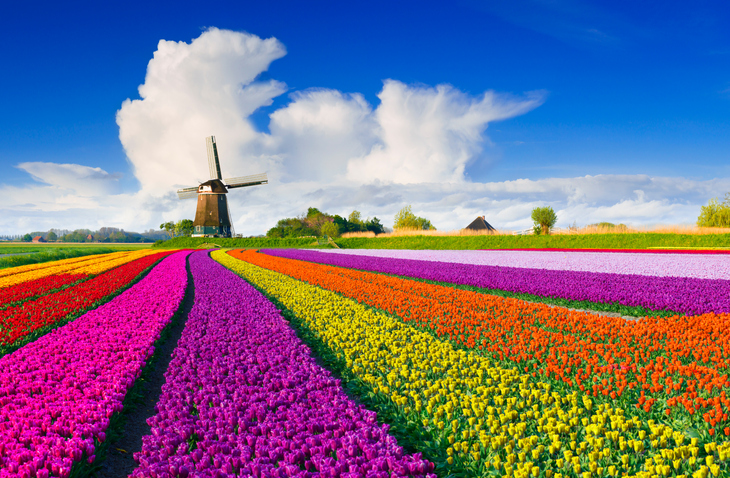 Mention of the tulips reminds me of my first visit to Holland. That was not the cycling tour in 1960 but a few years before when I was in third year secondary (now Y9). Our form master was a Mr Lindup - an unusual and easy to name remember. For the first time ever at our school a foreign holiday was on offer. With permission from my father to go (softened up by my mum), I set about raising the money. I already had a paper round and put in for another. This second round was near school so it worked in fairly well. All by bike, of course - I used to hide the newspaper delivery bag in a hedge nd collect it on the way home

However, another income stream was needed so I took on a milk round. I am not sure that the milkman really needed my help - perhaps he took pity on me. I have two main memories: getting really cold hands when handling the bottles and observing the ways of the milkman - a foreigner!

His name was Ernie Wolff - a sort of leftover German POW from the war. He was, in most ways, completely unlike the war film stereotype of a Nazi soldier. He was short and tubby - and rather proud of his Express Dairy uniform

I think the diary ran an incentive scheme so they could extend the product range beyond milk. One Saturday he greeted me with words along these lines: "Ah, Michael! I am zo proud for zis day I have been made Mister Yoghurt for zis month." I had never tasted yoghurt and was not greatly experienced in the business side of dairying  but the vision of Ernie strutting proudly ahead of his hand milk cart endures to this day

Reminiscing again! You must have better things to do ...

... best wishes from the Garden Codger

May I please share a concern with you and ask for your help? My friend, Henry, has a hole in his bucket. I've told him to mend it but he seems to be having difficulty doing this. I'm getting quite desperate. Please help 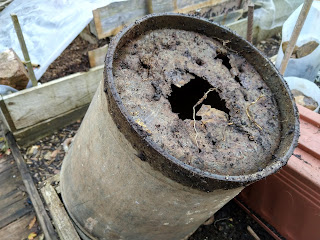 Well, Eliza, please don't get too worried. As it so happens, I have exactly the same problem as you can see here in this photograph. However, I know exactly what to do. Please drop in next week and I'll show how Henry can turn this situation to his advantage. In the meantime here is a photo to enjoy

As we mentioned, the hellebore is sometimes called the Christmas Rose. But don't confuse this with the Christmas Cactus which is a Brazilian succulent as shown here 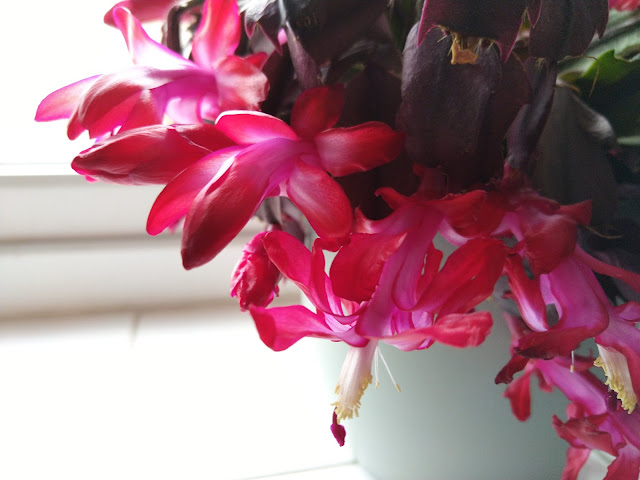