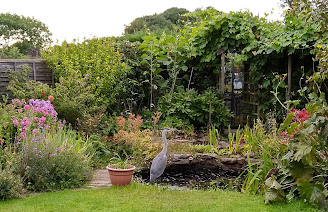 I have just come in from the garden where I was cautiously observing our morning visitor – the heron! Perhaps I should say, a heron rather than the heron. It seemed rather smaller than the one who usually visits. And, for once, I was able to get a picture. Not as close as I wanted so I have blown it up a bit

There is also a shot of the getaway. As you can see, a rather gloomy start to the day 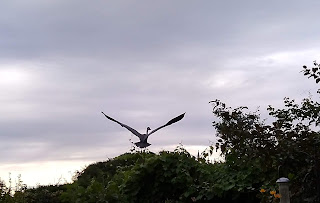 My heron interest has been sharpened as I noticed yesterday that the ghost carp (aka nuclear sub) has sustained some damage to its bodywork. Sadly, looks like it needs a paint job.

I do hope I did not knock him when doing maintenance work in the pond last week. There is little you can do for an injured fish. Small ones can be caught and separated if you have the facilities. No chance of that with our old friend. I’ll keep an eye on her. (I say her – thinking that would account for the super-abundance of small fish that tend to gather as a flotilla around the mother ship. I must find an expert to ask.) 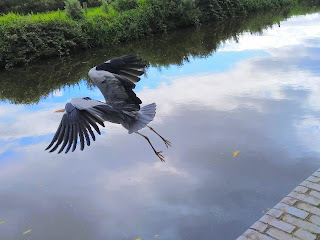 Herons are fairly common around here because of the many canals. Very many of the canals date right back to the industrial revolution - our local 'cut' was opened in 1769. It was built to carry coal from the local coalfields to Birmingham. It sees hardly any commercial traffic today, rather it is a favoured spot for anglers – and herons, of course

During lockdown, many friends seem to have rediscovered our local canal network – great places to walk. And they are on the flat – that suits us. Straying slightly farther afield, we took a pleasant stroll along the Staffordshire and Worcester Canal recently 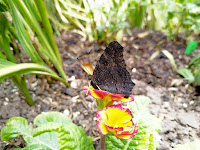 There, they seem to have herons that are more accustomed to photographers and I managed to get this shot

Meanwhile …
… back in the garden we continue to track butterflies. (Mrs Codger takes the lead on this this – I just tip-toe behind with camera.) 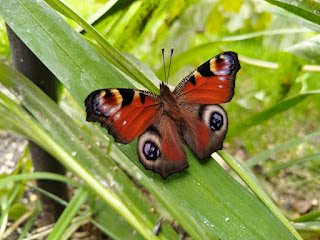 Perhaps we tend to notice them more because of the overall drop in numbers. My attention was drawn to the one shown here as the folded wings seemed so very black. I had no idea from the initial view of what sort it could be. Patience paid off and I was rewarded by a rare chance to get a good shot of a Peacock in its full glory

Another surprise!
Somehow a sweet pea had strayed into the main flower border. A lovely pale blue. Stray plants generally prosper – obviously, they know what they like. Anyway, I thought it worth a quick shot 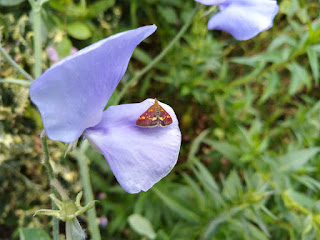 To my delight, it had a visitor! I pretty sure that it must be a moth – so tiny yet with such detailed and distinct markings. I love the classic delta shape. Can anyone tell me what it is?

More blue
Readers will have learned that Codger is partial to soft fruit - homegrown fruit, that is. In fact, in our division of culinary labour, he is responsible for desserts, so it is very much my season at the moment. We have judiciously worked our way through rhubarb, strawberries, cherries, raspberries, redcurrants, gooseberries and plums. This brings us to blueberries which are in season right now 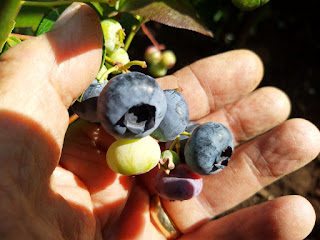 I mention this for a reason. If you do not have much space, blueberries are a great option. I have found that they do very well in containers – often better, in fact, than in the ground. But they must have ericaceous compost and, being container-bound, they will need a feed – a slow-release fertiliser is best with a drop of tomato-feed during the fruiting season. You can see my results - my hand will give you the scale

Two offers
I have some blueberry plants available at the moment. Good varieties – early, mid and late season. Please say soonest if you are interested. They are young healthy plants and promise to do well. And, just to remind you, I also have some rhubarb plants. They were potted up a couple of weeks ago and are doing well 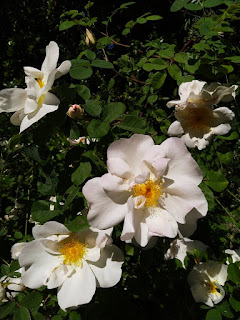 Completely different
Before we finish, let me tell you about a failure – and an attempted recovery. You may remember that a couple of months back we discovered a lovely single white rose growing on the side of our local walkway. (The photo was taken in late May.)

I subsequently took some cuttings in the hope of growing a plant in our own garden.It seems to cope with shade so I have a place, or two, in mind. Now, I am not great with cuttings but, even so, was annoyed with myself for letting them dry out. They looked as though they had made a good start

So, I am having another go and doing a bit of an experiment at the same time. Using fresh cuttings, taken over the weekend, I have planted up two sets. Both are in earthenware pots (although I see that experts disagree on the clay/plastic debate) 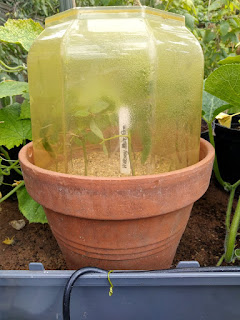 We are often told to cover the cuttings with a plastic bag. I have often found this rather troublesome - the bag flops and awkward to handle. As an alternative, I have deployed an old plastic goldfish bowl as you can see in this photograph

The second set I shall leave uncovered and see what does best. Both sets are in the greenhouse nestled among other plants in the hope of conferring the desired humidity

Incidentally, cuttings need, what is called, a sharp mix so I have added plenty of grit to the potting compost. You may remember that herein is another experiment/ruse - using chicken grit as a (much) cheaper alternative to expensive horticultural grit

We shall see. Our time has gone. More on propagation on Friday and a bit more on plant availability - our stock is rapidly increasing ...

... with best wishes from Garden Codger