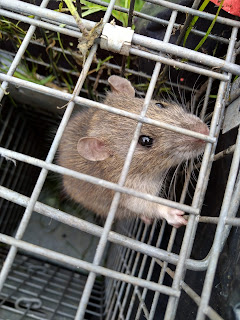 Quick update
What else has Codger been up to in November? Well, dealing with unwelcome wildlife has been one preoccupation. There is a downside to being a keen composter. The clue is in the photo (left). I've even resorted to moving my compost containers - this extended the old chap a bit - I tend to over-engineer such things. I dare not guess how much the reinforced bin weighs
The cheeky visitor had been removing the compost and using it to build a nest in the adjacent hawthorn hedge belonging to the school at the bottom of the garden.
When time has permitted, I've done other essential maintenance in that neglected part of the garden - perhaps more on this next time. I owe you an item of growing raspberries and redcurrants 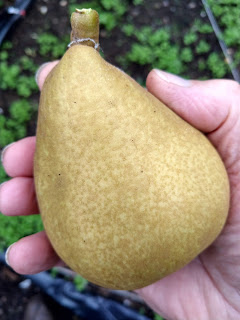 And only today, Mrs Codger consumed the last of our tomatoes. Despite the battle with blight we did well - eating almost into December! Plums were good, too - and figs. But we failed with our pear tree this year. Looks good, doesn't it - but this was the one solitary pear!
Well, folks, I'll try to get another edition in before Christmas. Until them I'll add a few more seasonal photos - please see below
Don't forget the Spring bulb Toylink offer. It would be great to boost the funds a bit more
Best wishes from ....
... the old Garden Codger
Postscript. Before I add the photos - did you hear Michael Morpurgo's poem dedicated to those poor souls who died in the channel this week? It is haunting. You can see the BBC video here