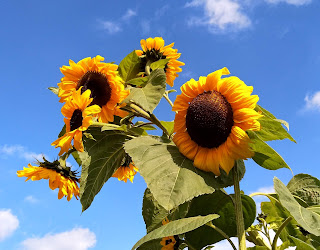 As summer begins its transition into autumn we can both look back and look forward. As with our potatoes (now consumed), so with the sunflowers. I never sow any - they appear without any Codgerly intervention each year, providing colour through into October and, even, November. In addition the large heads provide seeds for the birds well into the winter 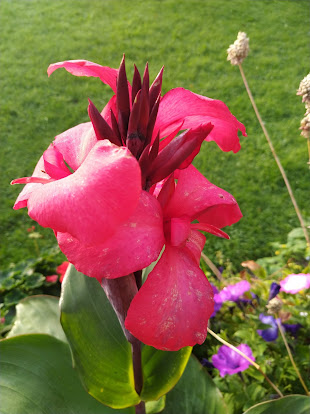 I think we can also expect the Cana to go on blooming for a few weeks more, although I'm not sure that it is supposed to be as late as this. Unlike the sunflowers it does need a bit of attention, particularly protection through the winter. But I don't mind that. It was a B&Q rescue so I'm pleased to see it perform its colourful magic once again

Incidentally, when shopping at B&Q, Homebase, or the like it is well worth checking out the clearance trolley for bargains. I recently purchased a very nice clematis at half price

Speaking of retail, I'd like to put in a plug for The Range. Do you know the store? - mainly Midlands, I suspect. Earlier this week I needed some green manure seed and thought I'd pop in for look-see. (Green manure refers to a crop that is grown simply to keep bare soil productive, usually over the winter.) The crop might be rye grass, clover or mustard. The pack in the photo comprises four different types. These seeds can be hard to track down - yet The Range had half-a-dozen different packets from a variety of suppliers. In fact, their seed range was extensive - far greater than many garden centres

Mind you, less attractive was the display of Christmas tat, if I dare put it that way. Shame the Suez canal blockage did not intervene - the containers obviously got through (I'm supposing most of the Xmas glitz is made in China). I'm afraid that we - Mrs Codger and I - like Christmas to be actually at Christmas

But I sound curmudgeonly, don't I? And I do make exceptions to the rule - see this week's tailpiece about Radio 3

[Newer readers please note: we have no pecuniary involvement with commercial companies. I mention this as some bloggers get an income stream from sponsors. There is nothing wrong with this, of course - provided the interest is declared.]

Raspberry restoration
Rather slowly, I'm trying to reorganise and improve the corner of the garden where my raspberries grow. The crop dropped off markedly this year so I was galvanised into action, as the saying goes. I had got them growing in a raised bed which tends to dry out too much. Moreover, the wooden planking was rotting off and needed replacing so the task became one of rebuilding the raised bed ahead of planting up fresh stock.

The new plants won't arrive for two or three months so, having finished the raised bed, I have sown the green manure. Looking today, I see that it has germinated within just a few days. Although we are halfway into September the ground is still warm so many seeds will get away quickly. When I plant the new raspberries I shall either dig in the green manure or harvest it for the compost heap

Raised bed lessons
In redoing the raised bed I applied the lessons learned over the ten years or so the old ones have been in place (or fifteen years, I cannot honestly remember - twenty?).
When I did the original beds I used untreated timber as I had read that treated timber would contaminate the soil. This photo shows the result - the soil contaminates the timber!
So, this time I used treated timber - standard decking, in fact. As a precaution I lined the beds with plastic sheeting in the form of reused compost bags. This accounts for the untidy finish but a quick trim will put that right
I also lowered the bed a bit. This will make it easier to increase the proportion of organic material and thus the fertility of the soil in the bed. You can tell the drop from this photo (right) - I deliberately left one plant in situ so I could illustrate the point
Lowering the bed has produced surplus soil - a further advantage in that I now have a supply of soil for potting. The nature of the Codger project means that I am a net exporter of soil!
Although I have ordered new plants, I have potted up quite a few from the old bed. This is partly as a precaution and partly in order to supply others. Raspberry plants available - enquire within
The battle against blight
Following on from the experience I related in our previous post, I have continued to deal with tomato blight. The measures I took have largely contained the outbreak. Not wishing to discourage others who have been less successful I must stress that the word is contain rather than cure
So far, only one plant in the greenhouse has gone down. I did my best to remove it gently so the spores did not get dispersed. Not all of my outdoor plants have been affected. I think this indicates that swift and drastic action can limit the damage. Really, it is a matter of buying enough time for fruit to ripen
[Since writing this paragraph I see warning signs on a couple more plants. As a precaution, I have removed the nearly ripe fruit to finish off away from the suspect vines]
Something more pleasant ...
... much more pleasant, in fact. Do you like butternut squash? If you have tried growing them you may, perhaps, have found them a little difficult
I think I have found the answer: uchiki kuri.
This is a Japanese squash. Personally, I find the flavour rather better than shop-bought butternut. When eating, the squash is prepared in much the same way as butternut: cut in half, remove the pith and slice off the rind. You can boil or bake - if you boil, 10 minutes is easily enough
I'm looking forward to harvesting our largest. I'll report back when I do
A new project
I know it is the trendy thing to do but worthwhile nevertheless - that is, creating a wildflower meadow. Well, hardly a meadow but a patch at least. You can just discern in this photo (left) - a darkened circle halfway back. Wildflowers increase insect diversity as well as having their own charm
Codger has not tried this before but was keen to help when asked by the garden's owner. You can see that the garden is long and mainly put down to grass 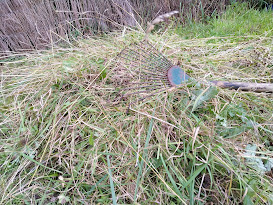 The first step was to cut the grass in the chosen area. (Actually, in our case, we had let the grass grow long for a season just see what wild flowers might appear without our intervention: we did get some - mainly of ragwort). After cutting the grass we thoroughly scarified the patch. The photo shows the sort of rake you need - it should have sprung tines. Finally, we sowed the seed. Easy as 1-2-3!
But there's a twist. In addition to the the general wildflower seed mix, which is easily obtainable, you need a packet of Yellow Rattle seed. All the books say that Yellow Rattle is essential to the process since it is parasitic to grass. Weakened by the Yellow Rattle, the grass provides less competition allowing the wild flowers to take hold
Now is just the time to sow the seed which, I'm told, must be fresh. It's probably best to order online from a company that guarantees that the seed has been harvested this year 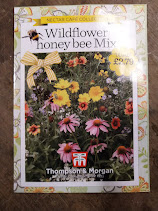 The seed mix should be dormant over winter and germinate in the Spring. As regards the wildflower seeds, there are any number of mixes readily available. Sowing in the autumn rather than in the Spring increases the chance of germination. Many readers will have heard of vernalisation - the process whereby a cold period triggers the later germination of seeds
Well, our time seems to have gone. And I have not done the Christmas item I mentioned at the beginning - must remember that next time
Channel swim
However, there is a news extra that I cannot pass over - the channel swim. In case you need a reminder: Our 15-yearold granddaughter has been in training for the past 12 months in order to participate in a cross channel relay swim
On Sunday morning they did it! Katie Ann was first in and last out - being the one to make landfall in France. She did three one-hour swims in all. The second squad followed on Tuesday - also successfully. You can see the Facebook videos here
Sponsorship has grown rapidly in the last few days. As we go to press £20,000 has been raised for their chosen charity, Mencap - their target is £25,000. Please click here is you feel inclined to help close the gap. Even if you don't give, it's worth reading the comments. One grandmother writes:

Don't anyone knock todays teenagers. An amazing achievement from a group who have worked their socks off, given up their time and experienced some pretty harsh training to achieve this brilliant result so as to help others who have greater difficulties

Well done to everyone concerned
... and best wishes from Grandpa Codger!
STOP PRESS
This is a late addition (Friday noon). I've just discovered that the headteacher of the school - who swam himself, what about that! - has just put up an exciting account of the swim. Makes a great read. You can find it here - also photos and videos
Only time for a couple of flower photos this week
Posted by Garden Codger at 13:46