... that is a question that intrigues many gardeners who have become aware of the debate: to dig - or, not to dig

Codger enjoys digging and has probably done more than his fair share - but in the case of our own plot a spade is now only used in order to plant a shrub. It may sound odd today but I was actually taught to dig at school (a punishment for failing the eleven plus?)

These days, I do not do any real digging, yet everything in the garden flourishes! So, what is the story?

We moved to our present property in the autumn of 1990. The land was previously the site of a steel works and, therefore, subject to heavy remediation due to contamination of the soil. I do not know for sure where our heavy clay came from, but I have reasons to suspect the Corby area as a result of iron ore extraction. I strange sort of apology for scarring the planet!

By the time the housebuilders got to work, the ground had been heavily compacted by huge machines trundling back and forth

During the first winter, I tried to dig the soil. Joke! The imported clay had set like concrete. So we settled down to several seasons with pick and shovel. Meanwhile the neighbours raced ahead by hiring a Kango. But, remember, educated as as a 'hewer of wood and a drawer of water' I dug doggedly on

In fact, I double-dug - a technique known as bastard trenching (why, I've no idea) and, in the process, discovered that drainage was a problem. This was in part solved by constructing a pond and also a reservoir (a story for another day) 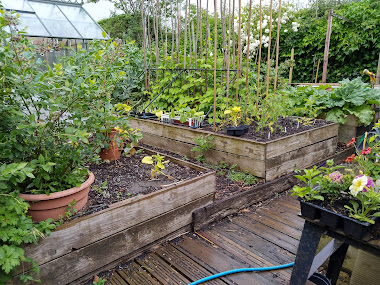 Skipping a few years and (hardly surprisingly) suffering some backpain, I decided to change the top half of the garden to raised beds. Two reasons: to improve drainage and to reduce bending on Codger's part. You will get a feel from this photo

Half of this area is now Codger's Nursery and half still used for vegetable growing which I still enjoy more than any other aspect of gardening - grow to eat, what could be better!

Somewhere along the way, I discovered a couple of things about vegetable growing. First, stuff grew well in undisturbed soil. Second, I did not need artificial fertilisers provided I was generous with home produced garden compost

So, almost by accident I became a no-digger. I lacked time to investigate this way of growing until 2017 at which point Mrs Codger had become unwell and needed hospital treatment

Now, this is not a criticism of the NHS but but I soon discovered the key skill of waiting. There seems to be a 90/10 rule at work. !0% treatment and - you can guess the rest. So, Kindle loaded I set about studying soil science in the hallowed waiting halls of our local hospital

The key thing is this: look after your soil and the soil will look after your plants. For me, the big thing about no-dig is that it promotes this approach allowing the micro-organisms in the soil to do their thing without unnecessary disturbance

Now, I've told the story for a reason. I do not think I would have got to the present stage of no-dig abundance without the initial dig. Why? Because the ground was so compacted by the original earthworks remediation

As it transpires my help was sought only this week by friends living in a fairly recent new build (recent to old Codger - probably 10 years old). Builders rarely respect the soil. They flatten it, compress it, and build on it  - and, for good measure, add rubble, sand and cement to the mix

So, I had no compunction in digging out (!) my old trusty tools. These included a mattock - a nice touch as the friends originate from Nigeria where the mattock is the standard digging implement. (Interestingly, they considered my mattock a puny thing compared to the African version!)

As I had suspected the soil was severely compacted. Incidentally, some care is needed with a task like this as telecom cables often lay there waiting to be severed by the unwary. We turned the 'soil' over, extracted a bucketful of stones and rubble, added a bit of compost and planted immediately

Old Codger has found that new gardeners need to be encouraged by a bit of impact so we cheated slightly with the addition of a hanging basket. You can see the result in the photo. The new plants (zinnias, dahlias and petunias) should fill out quite quickly

So what about no-dig?

We explained last week that we have the opportunity to establish a vegetable bed in a Birmingham garden. Last year's lockdown had provided the opportunity for the new owner to rescue the plot from utter dereliction

The garden has been restored to one long green strip - mainly grass but, we guess, quite a few weeds mixed in. Two flower beds have been established - a small and a large - and now comes the time for the  veg

Cardboard has been laid down (Charles Dowding style - see last week's photo) and we are ready to move to the next stage. The weather and real life has intervened so look out for a progress report next time - compost bagging has begun in preparation

Also following up on last week ...

I have now planted up the posh growbag - the one for which I constructed a frame made out of decking. (Remember, one 8' length turned into a 3' by 2' box with just two cuts?)

The middle tomato and the one on the right are both Sungold. Rather than a cane, I am persuading them to do the Monty Don rope trick. On the left we have the ubiquitous Cerise - with a bit of bamboo support. I'll report back in due course. Although they will only get morning sun, I'm hoping that retained warm from the wall will assist growth 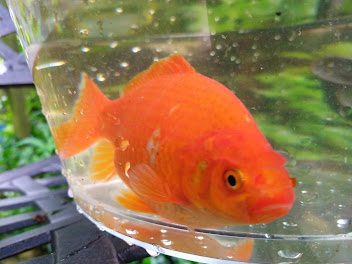 I have resisted an aquatic report for some time now. Partly because of a complete lack of drama. I think the heron still pays an occasional visit here but these intrusions less appear less frequent due to his, or her, lack of success

It seems that the provision of an underwater hiding place has been surprisingly successful. Now, a friend of Codger, and a reader of these pages, has requested that I help him restock his pool. In his case, the predations of a local heron had been 100% effective. So, for days now, I have been trying to catch some of my smaller fish

The photograph shows the total result of one whole week's angling. Time for a break - and a test of Codger's patience! I'll let you know how I get on ...

But, of course, life in the garden is like that. If you insist on being a perfectionist, gardening is not for you. It is a faithful slave but a tyrannical master. At least, this is what I tell myself when I look at my neglected soft fruit area. I had plans - but in the Lord's goodness we may be granted another chance next year to do what I had planned this year. Not in my hands ...

However, here is a tip that does not take much time and can save a bob or two. Sign up with one or two online suppliers of plants. Resist their many email blandishments until the summer solstice (just passed, of course). then look out for their special email offers - and you can save a small fortune

How does this work? Well, they have to move stock on to make room for the next lot - remember, we are dealing with perishable goods. Here are the bottom few lines from an order I placed today: 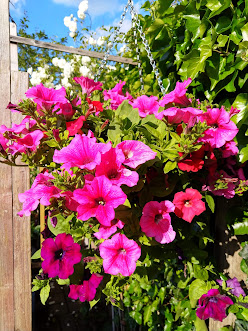 This is the last call if you are after tomato plants. We are almost out of our favoured bush tomato, Cerise. But quite a few cordon varieties (Gardener's Delight, Money Maker and so forth) - please get in touch, if you are interested

My big job in the coming week is to make up a few hanging baskets - hopefully like one one here (see photo). There is a snag with hanging baskets - the cost of the containers which can be as much as £10 each! However, I have found a number of cheaper alternatives and will press on with the job and tell you more in the next episode

The other day, Mrs Codger took it in her head to do a spot of weeding at the front. Seeing a couple of girls playing in the street (a cul-de-sac) she engaged them in conversation in a grandmotherly sort of way. Later in the day, we drove off in the car passing the two girls and received friendly waves

All for now, with best wishes from the old Garden Codger